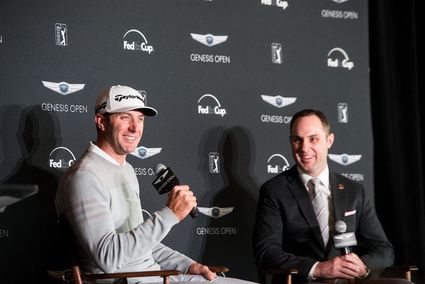 Dustin Johnson on the left, Mike Antolini on the right. Antolini is the tournament director and vice president of championships for TGR Live.

"Hit it straight, get it on the green, get it in the hole." Golf is that simple for Dustin Johnson, who returns to the Riviera Country Club for the Genesis Open February 15-18. Johnson, who first achieved the status of top-ranked player in the world following his win here last year, is defending against a strong field that includes many players just behind him in the rankings, as well as the looming figure of Tiger Woods.

Johnson was not in the field this past week at Torrey Pines in San Diego when Woods made his first start in a full-field event after a year-long layoff, but he did notice him. "He's swinging completely different. He looked healthy."

A competitive Tiger Woods means that golf gets more attention from sports fans, and Johnson appreciates that fact. "It's good for me, it's good for everybody.... I hope he plays well and I hope it's me and him coming down the stretch on Sunday, but I don't think he does."

In addition to Woods, Johnson will contend this year with Jordan Spieth, the third-ranked player in the world and current British Open champion, and fourth-ranked Justin Thomas, the defending PGA champion. Also in the field are Hideki Matsutyama, ranked fifth in the world, and perennial contenders and past major champions Rory McIroy, Bubba Watson, Adam Scott, Martin Kaymer and Jimmy Walker. Phil Mickleson is not yet committed, but is probable to attend, and Jim Furyk will appear courtesy of a sponsor's exemption.

Johnson should not expect as easy a time as he had last year, when he admits his big lead over the last nine holes allowed him to put his game on "cruise control" and just roll to victory. "All the guys out here every single week are very, very good, and you can never count anyone out."

Still, Riviera is very comfortable for Johnson, and the South Carolina native has adopted Los Angeles as a second home. Engaged to Paulina Gretzky, the daughter of hockey Hall of Famer Wayne Gretzky, Johnson has rented a home in Thousand Oaks near Sherwood Country club to be near her family. His affinity for the area extends to Riviera.

"It's a place that from the first time I ever came here a rookie on Tour, I just loved it and it felt like a place that really suited my eye." Johnson says the win here not only earned him his first stay at number one in the world rankings but also catapulted him to wins in his next three events.

Had it not been for a freak accident, falling on a set of stairs in a rented home in Augusta just before last year's Master's tournament, there's no telling how long Johnson's hot streak could have continued or where it could have taken him. Instead, he missed nearly two months and was no factor at either the US or British Opens, missing the cut at both.

Although he played out the rest of the season, Johnson now admits that he was much less than fully healthy. "I was playing and I could play well," winning one tournament and finishing in the top 20 in 8 of the 13 events he entered after the injury, "but I was having to compromise in my golf swing just so I could play." It was not until November that Johnson felt he was able to swing as he wanted. He's ready to take on Riviera and start a new winning streak.

These new areas will be free to fans and offer upgraded concessions and seating. The Vineyard Vines clothing line is sponsoring a viewing deck over the driveable par-4 10th hole that includes Adirondack chairs and a communal atmosphere. Genesis Motors will set up near the 14th hole with a greatly expanded hosting area that promises soft seating and unobstructed views from tee to green, as well as a putting green where fans can get advice and critiques from teaching professionals.

Last year, TGR Live was gratified by the number of families that attended the tournament, and this year they are adding to the family experience. Between the 14th and 15th holes they have added a "family village." The area offers a STEM learning lab, a six-hole mini golf course, and other attractions, which will include a presence from the LA Rams.

Santa Monicans wanting to attend the tournament have a few options for getting to the tournament. There will not be parking available at Revere Middle School once the tournament is underway, but at least fans do not have to park on the VA grounds in Westwood. Instead, the designated parking areas will be the city structures around the Third Street Promenade.

Parking will be available all day at the regular city rate, and the tournament will provide free shuttle service from the end of the Promenade at Wilshire Boulevard. Over a dozen tournament Ambassadors will be in the area providing direction and advice for people going to the Genesis Open. No ticket is required to ride the shuttle, which runs from 6:00 am to 7:00 pm for the Wednesday Pro-Am and the first two rounds on Thursday and Friday, and from 7:30 am to 5 pm on Saturday and Sunday.

Ridesharing services as well as taxi and limo drivers will be directed to drop off passengers at Revere Middle School. Uber is the official rideshare partner of the tournament, and last year had a free ride code available on its website. 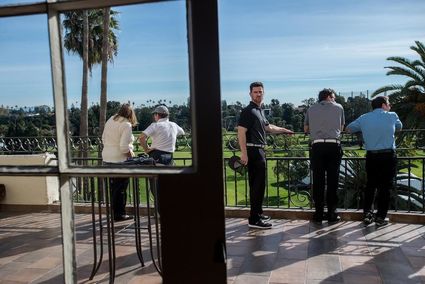 Tickets are available on-line and at the gates of the event, and start at $20. Active duty and retired military get in for free, and can buy tickets for friends or family attending with them through Govx at http://www.govx.com or at the gate with proper ID.

The gates open about a half hour before the start of play, which is at 6:40 am the first two days and at 8:00 am the last two. Last year's event was plagued by heavy rain and shut down early one day because of concerns about spectator safety on the course. This year's forecast, right now, is much brighter.

Dustin Johnson is hoping for sunny skies and another win. He knows he has to deal with skilled veterans and a number of rising young talents such as Spieth (24), Thomas (24) and McIroy (28). Johnson is ready to take them on, and the 33-year-old notes that the age difference is not so great. "I still think of myself as a young player."