Yes, Foods can be aphrodisiacs. Who knew? Amy Reiley, who tells you just what to eat naked! 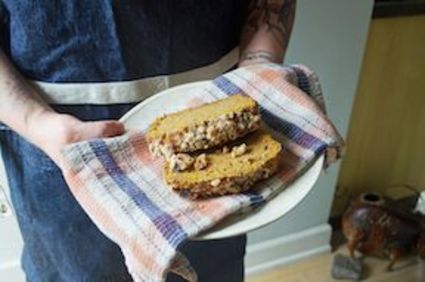 Just in time for Valentine's Day, make that perfect Aphrodisiac dessert for your Special Pumpkin, Apple of Your Eye, or Little Cabbage (it's a French idiomatic phrase...) with Eat Cake Naked by Amy Reiley and Delahna Flagg.

Amy Reiley is recognized as a leading authority on aphrodisiac foods. Her work as been featured in publications as varied as Playboy, National Geographic and The New York Times. Reilly decided to write a book of aphrodisiac desserts because "they're the perfect thing to eat naked, and because dessert is my favorite part of any meal." But when she told people that she was working on a book entitled Eat Cake Naked, they would inevitably ask, "Do you mean eat cake that has no frosting or do you mean strip down and eat cake in your birthday suit?"

Reilly meant the latter, but the former inspired her. You see, she's always had an issue with dessert as an aphrodisiac. Many ingredients used in typical desserts are historically considered aphrodisiac, but the problem is with how they're combined, particularly in the United States. Staggering amounts of sugar, not to mention artery-clogging (and orgasm-blocking) fat, lead to depressive sugar crashes.

So Reiley partnered with Delhana Flagg to create an aphrodisiac dessert cookbook that is naked of all the classic roadblocks to a sexy good time in the bedroom later. So you can have your cake and eat it to, with delightful recipes including the below recipe for Bacon Streusel Pumpkin Cake!

So easy as pie, grab your copy on your Kindle for $9.99, and get baking for that perfect romantic Valentine's Day experience!

This cake is dedicated to all the bacon lovers in our lives. We wanted to come up with a way to use bacon in a dessert that didn't involve chocolate. Our inspiration was an autumn breakfast: pumpkin pancakes with a side of extra crispy bacon. Could we translate that into a cake? We started with all the best things about pumpkin, like its combination of savory and sweetness and creamy, moist goodness. And then we considered the most seductive notes of bacon, like it's crisp texture and lingering smoky saltiness. The result is something that goes both ways-as in savory and sweet. (What were you thinking?) It can be served as the ending to a holiday meal. But it could also be a show-stopping side dish at brunch or a midnight snack shared between starved lovers. There really is no history of bacon as an aphrodisiac. We know, it's hard for us to believe, too. In fact, when people want to "talk aphrodisiac" with us, it's the single, most-mentioned food. Many bacon lovers have sworn to us that the mere scent of cooking bacon can send them into the throes of passion. It's definitely something to consider when you're getting ready to bake this cake! Sometimes, it's the timing that matters most.

For The Bacon Sprinkles:

For The Loaf Cake:

To Make The Bacon Sprinkles:

2. Line a baking sheet with foil or parchment. Arrange the bacon strips on the baking sheet

3. .Cook the bacon until crisp, approximately 18–20 minutes. (Keep the fires burning in the oven after you've removed the bacon. You'll use it again in a few minutes.)

4. Wrap the bacon in a blanket of paper towels and press out the grease. You may need to use additional towels to soak up as much grease as possible.

5. Once the grease is removed, cut the bacon crosswise into 1/3-inch strips.

6. Transfer the bacon to another parchment-lined baking sheet and tenderly coat with brown sugar.

7. Return the bacon to oven and coat for 14–15 minutes until it's ultra-crispy. (Keep oven hot for the cake.)

8. Separate the bacon from the brown sugar and finely chop it until it resembles bacon bits. These bacon sprinkles will be added to your buttery streusel.

To Make The Streusel:

1. Combine the flour, sugar and bacon in a small bowl.

1. Sprinkle with the water and cut in the butter with a fork until the mixture is crumbly. 3. Squeeze it in your hands until it's thoroughly combined then break into large, sugary bites with a bit of fine crumbs for a variety of texture. To make the cake: 1.Make sure your oven is heated to 350 degrees. 2. Coat a 9-inch (1.5-qt.) loaf pan with butter or baking spray.

1. In the bowl of a mixer or a large bowl, combine the all-purpose flour, coconut flour, baking powder, baking soda, cinnamon, ginger, salt and brown sugar.

2. Add the vinegar to the milk and take it for a quick twirl. If you're using a mixer, crack the egg into a small bowl then add it to the mixer (or to your bowl if you aren't using a mixer). Add in the milk and oil and blend for 1 minute, making sure to scrape down the sides of the bowl. If you're working it by hand, make a small well in the center of the flour mixture. Gently whisk the egg in a small bowl then add it, along with the oil, to the milk. Pour the liquid into the center of the bowl and rhythmically stir until the ingredients are completely incorporated.

3. Fold in the pumpkin and stir to a smooth, thick batter.

4. Spread the batter into the prepared loaf pan, gently smoothing the top. Sprinkle with the streusel,

5. Transfer the cake to the oven. (The streusel may topple over the sides of the pan during baking. If you don't want to risk having to clean your oven, cook the loaf pan on top of a baking sheet. Note that cooking may take a few minutes longer.) Bake for 70–75 minutes, until a cake tester inserted into the center comes out clean. *You can make this cake as 4 mini loaves or 12 muffins, but you'll need to shorten your cooking time.