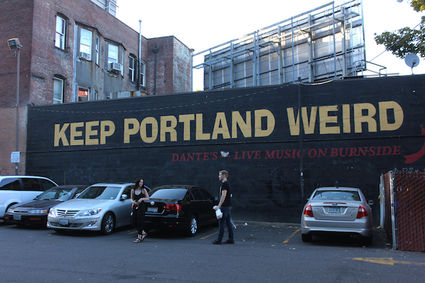 A few weeks ago, Edible Skinny was lucky enough to have The Thomas Gals do a "Girls Getaway Weekend" to Portland, Oregon and the Willamette Wine Valley (more on that next week!)

The claims of Portlandia are true "The Dream of the 90's is Still Alive in Portland," as this city is full of eccentricity and weirdness (redundant I know, but this city definitely contains both!). Stumptown might be Oregon's largest city, but it has a small-town feel with a rainbow of sparkly beautiful people, places, and food! Here's some of the FAB-U-LOUS-NESS we encountered while checking out the very rainy Rose City.

We felt like we were taking a trip back in time when we stayed at the historic sailor's hotel, lovingly restored as "The Society Hotel." Located in the heart of Portland's Old-Town/Chinatown, this hipster hotel is within walking distance to everything that's popping in Portland.

In early 2013, four friends channeled their love for transformation and purchased a long-forgotten property with hopes of bringing a new hospitality concept to Portland – stylishly quirky, affordable, and (most definitely) friendly. Private and boarding room style guest rooms are restored to be just as you might have found them in the 1880's, only with all the modern amenities and comfort we now expect! ;-)

In true Portland fashion, it feels like a meeting place for the hip and hipper. With decor that reminds you of a handlebar mustache, no details has been overlooked. Reclaimed materials are utilized throughout the building. Fresh white linens mixed with dark word makes you feel like you've stepped in a speakeasy. There are interactive art installations involving dry erase markers, coloring templates, and a spotlight (which led to hours of creative fun!).

The house bar offers handcrafted coffee, beer, wine, and spirits on hand. This makes the lobby the perfect place to sip a cup of coffee and lose yourself on a leather couch next to the fireside glow.

We started our city food tour with some killer coffee at Stumptown Coffee Roasters. Portland is nicknamed Drip City for the more than 40 roasters within city limits. In the mid-19th century, Portland's growth led residents to clear a lot of land quickly, but the tree stumps were not immediately removed; in some areas, there were so many that people used to jump from stump to stump to avoid the muddy, unpaved roads. Hence the nickname Stumptown! Over a hundred years later, Stumptown Coffee Roasters was founded in 1999, helping pioneer the Third Wave of the coffee movement (First Wave = Folgers, Second Wave = Starbucks, Third Wave = Cold Brew Single Origin Coffee).

Focusing on direct sourcing single-varietal beans, Stumptown Coffee is coffee richness where you can taste the roast. This tidal wave of coffee now has four cafes in Portland along with Seattle, New York, Chicago and Los Angeles. With dark and rounded flavors, it's the perfect way to start your day!

First and foremost known for beer, the brew pub's 26 taps feature Deschutes mainstays plus a selection of seasonal and experimental beers developed and brewed on site exclusively for their Portland pub. The Thomas Gals were tickled pink by their Red Chair Beer (which felt like a Big Sur Coastline and your favorite flannel).

But their food... this was classic pub food elevated to the next level! We had our reservations about eating at such a well-known brewery, but in the best surprises this was our most impressive meal in Portland. Deschutes didn't miss a beat on craft or care when it came to food preparation!

Their Inversion IPA Pretzel topped with creamy white cheese and Black Butte Porter stone ground mustard was sublime. Kelly referred to it as the "most perfect baked bread consistency I've ever had. It's golden on the outside, but like a cloud on the inside. It was soft and strong, like a woman."

We then split their Bacon Brie Burger, two quarter-pound Oregon Valley Natural grass-fed beef patties, quince jam, triple cream brie, crispy onions, applewood-smoked bacon. Savory with a round creaminess, it tasted like an outside Sunday Brunch on a crisp autumn day. "I'm definitely going to tell you... it was the best burger of my life," chirped Kelly.

It was then off to Powell's. With two writers in a family of two we needed to swing by gold card of bookshops.

Powell's City of Books is the largest independent new and used bookstore in the world. Located in the Pearl District on the edge of downtown Portland, it occupies a full city block. This is a bookstore you can get lost in! Powell's contains over 68,000 square feet (about 1.6 acres of retail floor space), has nine color-coded rooms, and over 35,000 different sections. CNN rates it one of the ten "coolest" bookstores in the world.

After getting our "Lit On," we headed to another brewery (there's 60 plus in a city with a population of a little over a half of million). This time it was to the beer drinkers haven: 10 Barrel Brewing Company. A brewery that gets everything right, from image to flavor (hence why Anheuser Busch bought them a couple years back).

On the quest to create beer ripe with flavor and personality, 10 Barrel started production in Bend, Oregon in 2006. They can now be found nationwide with 5 Brewpubs, including the Portland. With unique and uncompromising flavors, 10 Barrel offers a little something for everyone. A "non-beer beer drinker," I delved into Bubbly, their flagship year-round Cider! Their description of when to drink Bubbly was so absolutely FAB we feel it's our duty to reprint it:

When to Drink Bubbly: when you master the Dougie. When you break level 100 on candy crush. When someone swiped right. When you find out 2Pac is alive and well. When you break out of the friend zone. Whenever you want. Best paired with one more.

In the three years since Portland's legalization of recreational marijuana, cannabis has become a thriving industry. There are 425 registered marijuana dispensaries in Oregon (that's more locations than Starbucks). One of the jewels of the Portland cannabis scene is Serra (our hotel clerk told us it was like "walking into an art museum.") This boho boutique-meets-pharmacy offers you "quality drugs and other fine cannabis accessories." We delighted in their single serving edibles in Sativa, Indica, or both (which is hard to come by in edibles in Oregon as most companies don't categorize at all). Serra also sells funky pins proclaiming their logo of "Quality Drugs," so everyone can know you're in the know! ;-) 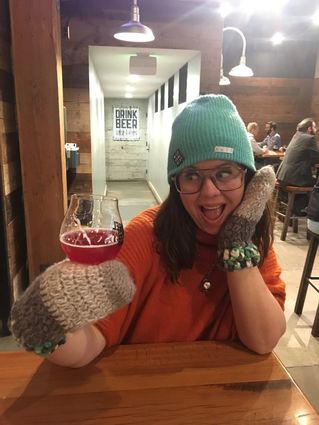