Video of eagle on Santa Crus Island goes viral, after it reacts to earthquake 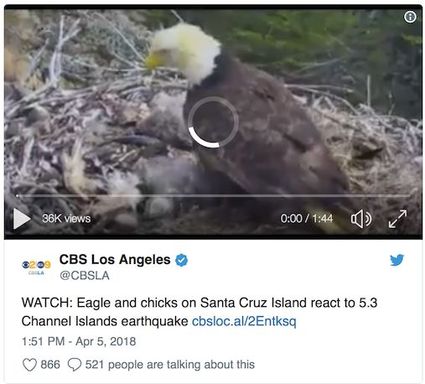 Mama eagle didn't know quite what to do when her island home started to shake.

An earthquake measured at a preliminary magnitude of 5.3 on the Richter scale, struck in the seas off Santa Cruz Island on Thursday afternoon just after 12:30

On Santa Cruz Island, a live webcam captured a bald eagle's jolted reaction at the epicenter.

The temblor occurred just before 12:30 p.m. and was centered south of Santa Cruz Island" said the LA Times. "It was felt as far away as Bakersfield, Palmdale and the city of Orange, according to witnesses and the U.S. Geological Survey."

Some people in Santa Monica did not notice the shaker, while other's thought it was bigger than a 5.3. The earthquake caused no damages or injuries.

Interestingly, the region's new Early Warning system did give about ten seconds notice of the quake. Early Warning Labs in Santa Monica has developed an app. If you download it, and you live in Santa Monica, you would have received 28 seconds warning of the earthquake, it's magnitude and direction.

John Vidale is the Director of the Studies Center at USC. He told the Times that he and colleagues at USC heard beeping 10 to 15 seconds before the quake's shaking reached their campus.

"We all felt it pretty well. It was small and distinct," he said. "We heard the warning go off and then we heard the shaking."

The early-warning system is under development by the USGS and is available only to a limited number of testers today. But more people will be eligible to test the system later this year.

It works on a simple principle: The shaking from an earthquake travels at the speed of sound through rock - which is slower than the speed of today's communications systems.

For example, it would take more than a minute for a magnitude 7.8 earthquake that starts at the Salton Sea and travels up the state's longest fault, the San Andreas, to shake Los Angeles, 150 miles away. An early-warning system would give L.A. residents crucial seconds, and perhaps even more than a minute, to prepare.

The early warning system received a significant boost in the federal budget signed into law by President Trump in March.

As part of the $1.3-trillion budget bill, $22.9 million were earmarked for the project. That more than doubles the $10.2 million it got in the previous year's budget.