Cher: The Beat Goes on with Additional 2018 Dates Added for her Concert Residency

at the Monte Carlo Resort and Casino in Las Vegas 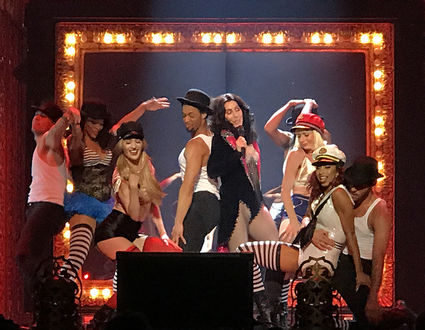 Photo of Cher and her ensemble cast performing "Welcome to Burlesque" at her concert residency, "Classic Cher", at the Monte Carlo Resort and Casino in Las Vegas.

Oscar, Golden Globe, Emmy, and Grammy award-winning super star, Cher, whose career in music, theater, television, and films has spanned well over fifty years, purportedly retired in 2005 after her three-year world-wide tour, "Living Proof: The Farewell Tour". During that time, she appeared in three hundred and twenty-five shows before an estimated three million fans.

In 2008, Cher came out of retirement, first to perform a concert residency at Caesar's Palace in Las Vegas ("Cher at the Colosseum") and then to stage her "Dressed to Kill" North American tour in 2014 to support her twenty-fifth album, "Closer to the Truth".

And now Cher is back, this time for the staging of her most recent concert residency, "Classic Cher", at the Park Theater in the Monte Carlo Resort and Casino in Las Vegas. "Classic Cher" is a fabulous show which showcases some of Cher's greatest hits, old and new. It boasts beautiful sets, a host of back-up dancers, and glamorous and dramatic costume changes. At one point, Cher even rides onto the stage on an elephant!

Cher is best known for her deep contralto vocals, her outlandish costumes, her Bob Mackie designed dresses, her wild hairdos, her risqué red carpet looks, and for having sold over one hundred million albums. She is also known for her wit. At her "Classic Cher" concert, she addressed the subject of aging by saying, "I did a five-minute plank today and I'm 71. What's YOUR grandmother doing tonight?"

Born Cherilyn Sarkisian on May 20, 1946, in El Centro, California, Cher began her singing career in 1963 under the stage name Bonnie Jo Mason with the song "Ringo, I Love You". Neither the song nor the stage name would last.

After dropping out of high school in 1963 due to undiagnosed dyslexia, Cher met Sonny Bono, who introduced her to Phil Spector of Gold Star Studios. Spector signed Cher as a back-up singer for the Ronettes, a popular girl group. Shortly thereafter, Sonny and Cher recorded two songs under the stage name, "Oscar and Cleo". The songs went nowhere, though one, "Baby Don't Go", would later be re-recorded and prove successful.

In 1965, Sonny and Cher, recording under a new stage name, "Sonny and Cher", produced their album, "Look at Us", which included their first blockbuster song, "I Got You Babe". The rest, as they say, is history. The duo went on to produce many more hits, appear in numerous world tours, and even host their own TV Variety Show, "The Sonny and Cher Comedy Hour".

Sonny and Cher divorced in 1974. In 1975, Cher married rocker Gregg Allman. They divorced in 1979. Unmarried, with two children to support, Chastity (now Chaz) Bono and Elijah Blue Allman, Cher decided to shift gears. She moved to New York to pursue an acting career.

Cher's acting break came when she was cast for a very small role in the stage version of "Come Back to the Five and Dime, Jimmy Dean, Jimmy Dean." From there, she moved on to movies including, "Silkwood", "Mask", "The Witches of Eastwood", and "Moonstruck", for which she earned an Academy Award for Best Actress (1987). 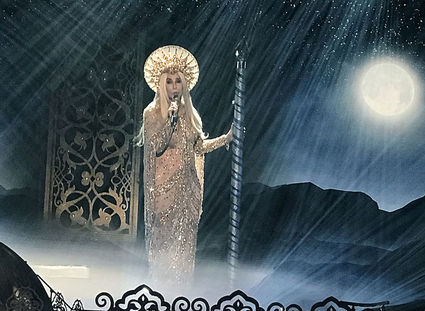 Photo of Cher singing her hit song, "After All", at her concert residency, "Classic Cher", at the Monte Carlo Resort and Casino in Las Vegas.

In 1998, Cher returned to singing with the release of her twenty-second studio album, "Believe". "Believe" was an upbeat dance-pop album, which was a considerable departure from her previous primarily pop-rock repertoire. The single, "Believe", became her biggest hit, selling over 11 million singles worldwide, and the album reached Number One on the charts in twenty-three different countries.

With "Believe", Cher became the only American singer to produce a "Top Ten" hit single in four consecutive decades (1960s, 1970s, 1980s, and 1990s). Additionally, along with Barbara Streisand, she is the only performer to be awarded a Best Actress Oscar and to have a Number One hit song on the Billboard Charts. In 1998, Cher was awarded a star on the Walk of Fame on Hollywood Boulevard.

Cher's concert residency, "Classic Cher", has been extended through November 2018 at the Park Theater in the Monte Carlo Resort and Casino in Las Vegas. Tickets are available at http://www.ticketmaster.com. These may truly be Cher's final live performances. If you haven't seen Cher perform live, now is the time!