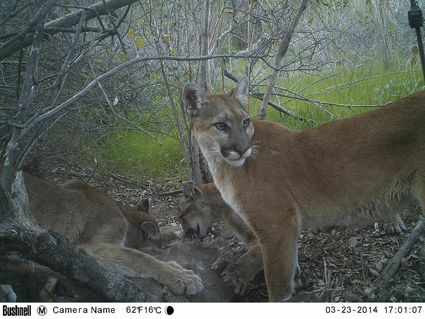 A new report offers recommendations on the location and type of wildlife crossing structures proposed for two of the busiest freeways in the world. Interstate 15 in western Riverside County and U.S. 101 in Los Angeles and Ventura Counties both bisect large areas of natural habitat and serve as major barriers to wildlife movement and gene flow, especially for mountain lions.

The report summarizes the input from some of the world's foremost experts on wildlife connectivity and crossing structures and combines it with landscape characteristics and wildlife data to prioritize locations for wildlife crossings. The experts evaluated locations that would improve connectivity for all kinds of wildlife, including for the imperiled mountain lion populations in the Santa Ana and Santa Monica Mountains.

"The loss of mountain lions in this area could have potentially harmful impacts on this ecosystem," said Seth Riley, report co-author and wildlife ecologist at Santa Monica Mountains National Recreation Area. "Wildlife in the Santa Monica Mountains is essentially trapped on an island of habitat, and a crossing structure would allow two-way migration to increase gene flow generally, and specifically increase genetic diversity for mountain lions."

Genetic diversity levels for mountain lions in the Santa Ana and Santa Monica Mountains are lower than have been measured anywhere else in the west. Only the endangered Florida panthers, which suffered from severe genetic defects before the introduction of females from Texas, have been found to have lower genetic diversity.

"Right now, these busy highways have become nearly impenetrable barriers for mountain lions trying to travel into or out of both the Santa Ana and Santa Monica mountains, forcing them to sprint across many lanes of traffic, endangering their lives – and the lives of people in the cars," said Trish Smith, report co-author and ecologist at The Nature Conservancy. "This report puts the power of science and data to work to identify the best locations for a network of crossings that will provide safe passage for mountain lions and other isolated and threatened wildlife. And we have already used the findings to inform the purchase of land just last week for a future I-15 wildlife crossing in the Rainbow Canyon area."

Wildlife crossing structures would allow juvenile mountain lions, among other wildlife, to move out of larger populations from east of the Santa Ana Mountains and north of the Santa Monica Mountains into the isolated coastal mountain ranges.

"Our research has shown that the mountain lion population in the coastal Santa Ana Mountain Range is at risk of decline due to high mortality rates and restriction of gene flow by Interstate 15 and development," said T. Winston Vickers, report co-author and associate veterinarian at the University of California, Davis' Wildlife Health Center. "We hope that this report adds to the knowledge needed to make improvements that will allow wildlife to cross this busy highway."

The report (see attached) evaluated eleven potential locations in the Santa Ana Mountains and seven in the Santa Monica Mountains. Each site was rated for evidence of wildlife use, including mountain lions, landscape connectivity, and the extent to which land was protected or at risk of development. Specific recommendations include:

Construction of a new wildlife overpass over I-15 south of Temecula Creek Bridge, as well as enhancements to the area underneath the existing bridge.

Construction of a new wildlife overpass over the 101 Freeway at the West Liberty Canyon site. A tunnel option was deemed inferior because constructing a tunnel large enough to serve a broad range of species would be prohibitively expensive and complicated from an engineering perspective.

Accompanying measures such as effective wildlife fencing to funnel animals to crossing points and appropriate vegetative cover on or near structures are critically important.

In both mountain ranges, additional locations offer the potential for new construction or enhancements that could provide secondary crossing sites.

Data from the study is already being used to optimize and inform planning.

Caltrans, along with numerous other partners, is currently working on a plan to build a wildlife crossing over the 101 Freeway in the Liberty Canyon area and last fall released the draft initial study and environmental assessment for the project.

Informed by this study, last week The Nature Conservancy acquired approximately 73 acres in the Rainbow Canyon area along I-15 near Temecula, a critical property needed for the placement of one of the highest priority wildlife crossings identified in the report.

UC Davis researchers are teaming with civil engineering faculty and students at Cal Poly Pomona and Caltrans, with the support of the NCCP Local Assistance Grant program and the San Diego Association of Governments, to better define the most feasible locations and types of crossing structure modifications that could improve the ability of mountain lions and other wildlife to cross I-15 in the future, including a future Rainbow Canyon crossing in the area where The Conservancy purchased land.

The Nature Conservancy is a global conservation organization dedicated to conserving the lands and waters on which all life depends. Guided by science, we create innovative, on-the-ground solutions to our world's toughest challenges so that nature and people can thrive together. We are tackling climate change, conserving lands, waters and oceans at unprecedented scale, providing food and water sustainably and helping make cities more sustainable. Working in 72 countries, we use a collaborative approach that engages local communities, governments, the private sector, and other partners. To learn more, visit http://www.nature.org or follow @nature_press on Twitter."

Santa Monica Mountains National Recreation Area (SMMNRA) is the largest urban national park in the country, encompassing morethan 150,000 acres of mountains and coastline in Ventura and Los Angeles counties. A unit of the National Park Service, it comprises a seamless network of local, state, and federal parks interwoven with private lands and communities. As one of only five Mediterranean ecosystems in the world, SMMNRA preserves the rich biological diversity of more than 450 animal species and 26 distinct plant communities. For more information, visit http://www.nps.gov/samo.

The UC Davis Karen C. Drayer Wildlife Health Center seeks to advance the health of wildlife in balance with people and the environment. Through projects and programs, the center focuses on critical issues involving free-ranging and captive terrestrial and aquatic wild animals. As key components of the UC Davis One Health Institute and School of Veterinary Medicine, the center provides broad-based service, training and research activities as they relate to wildlife health and conservation.