Interview with Joseph Culp and Scott Ben-Yasher, the Men behind Welcome to the Men's Group

To Become a True Warrior, A Man Must Be Initiated Into the Tribe by Older Men

I sat down with the principals behind Welcome to the Men's Group, to ask them what the movie was about, other than a bunch of middle aged men taking their clothes off and discussing their feelings. OK, fine, actually I spoke to Joseph Culp and Scott Ben-Yasher by phone. Here our my notes from our conversation.

Q. How did you become interested in men's feelings?

Culp: Scott and I have participated in mens groups for many years and that's how we met. This was years before we decided to make a movie called Welcome to the Men's Group.

How did I become interested in men's feelings? I found myself as a man with a need to speak about my feelings. I come from generation that is not my father's generation. My father believe that men are stoic, they do not talk about their feelings and try to hide them. Anger is more acceptable from a man, but nothing else feelings wise. And that's a whole paradigm of masculinity that has changed with the advent of feminism

I found myself as a younger man looking for a place to press my feelings. I'm very interested that as a man, I have a lot of feelings and I don't necessarily want to be silent about them. But that's risk we take, because our culture still views masculinity in a very narrow way.

Q. At times, your character Michael seems to be quoting Robert Bligh's Iron John. "The problem is to be a true warrior, a man would have to be initiated by other men. When we are not properly initiated by our fathers or other male mentors, we feel inadequate, disconnected, distrustful of other men. We develop addictions, chase other men's wives, and feel ashamed of being alive."

Yes, and this is practically a direct quote from Iron John.

In 1990 Robert Bligh did an interview with Meyers, and I was in a lot of crisis emotionally, and his book came out the same year in 1990, and that began my evolution, he was talking about initiation. He seemed to be talking to me

So there's a whole piece in WTTMG about story telling and the myth poetic movement, using myth and poetry to access deeper insight about masculinity

In fact I would say WTTMG is the only film that has taken Bligh's work into the American cultural mainstream.

What were your influences, in terms of other movies? Bad Moms was a hit. Women talk about their frustrations as mothers and wives. Is WTTMG you know, "Bad Dads?"

John Cassavedis was an influence, the Boys in the Band, which is about Gay men, there's still a common thread about self hatred and shame. Those are the films and the film makers that probably influenced me the most.

Joseph and I thought this could be a movie by men about men but for women. After all, women have long been hungry to find out how men really think.

When I started to join my mens group I was urged to go by my wife, she was able to see the value whereas I was a little resistant.

In a way it's an homage to all women. Who think wouldn't it be great if men could look at each other and trust each other, without losing their sense of masculinity?

IT was less a reaction to any kind of moviemaking. It's more a sense of My Dinner with Andre meets Hangover, there are very few films like that. It's not Bad Dads, it's more like Hangover. It's hard to find a current film that it might be close to-WTTMG is unique.

It's a through investigation of most men's feelings, and most films are not going to attempt that.

Because of the nature of femininity, it's easier for women to say, these are our real feelings, because that's acceptable. Men are really kind of a taboo subject, to talk about how you're hurting

SBY: It's almost more permissible for women to show toughness like a men, than for men to show vulnerability.

The film includes a young character "Tom," who's attending the Men's Group for the first time. Tom's a 35ish unemployed father, who's a stay at home dad. Is the movie about his initiation by older men.

Culp: We envisioned Tom as being the male audience member sitting out in the audience eating popcorn, and they're introducing him into a manner or mode of self awareness. He is there stand-in for the American male; whoever that is.

SBY: By initiating Tom, we're initiating the male audience member who doesn't even know what a men's group is

What's an initiation ritual today? Other than a Bar Mitzvah for Jews, no one seems to have a good answer. We don't have many initiations that end up the way things go to such an extreme as in WTTMG (laughter). But it's not conscious on their part.

What was it like to work with Timothy Bottoms?

Timothy Bottoms was a dream to work with. His manager caught wind of the audition and sent him over he drove down from his ranch in Big Sur and met with us, and said common, which part do you want? And he chose Larry

And that was so diametrically opposite with how he is as a person. He's laid back, cool, post hippy as a person. But he understood something about the internal struggle of Larry.

So your dads. Oranos, or Chronos?

Culp My dad was Oranos, but he was both, there was a mix. He was a movie star and that made him kind of distant in a certain way, because his lifestyle choices came first

But I tried hard to bridge that. My dad had a certain critical eye or a sharpness, a narcissism in a certain way. He didn't really want to have anyone challenge that. So there was a chronos element there to

SBY: My father defied both images. He was Oranos in that he went to work each day and was not available if I was frightened or skinned my knee. But when he was around he had a lot of maternal instincts. He hugged and kissed me and talked to me

Surely there are people out there today interested in the theme that Scott and I are interested in. They're the independent arthouse theater crowd.

I've had the opportunity to screen WTTMG in London and Norway and they were thrilled with the movie, didn't feel like a trying to make you laugh kind of movie. 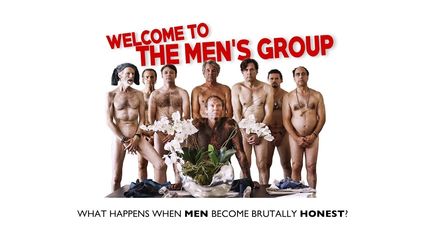 But when you to to the Laemmle Theater, the moviegoers are 50 and up. That population doesn't get spoken to enough. It's time that a different type of movie is offered on the screen

We've actually had 30 year old men say I was touched by this film, it made me think of my father, (Actor Robert Culp). This film is about precisely what his generation has never wanted to talk about

From a marketing point of view there's a huge audience for this. it's just about getting it in front of them.

What About Men's Feelings Anyway? "Welcome to the Men's Group" Opens May 18 http://www.smobserved.com/story/2018/05/14/entertainment/what-about-mens-feelings-anyway-welcome-to-the-mens-group-opens-may-18/3440.html