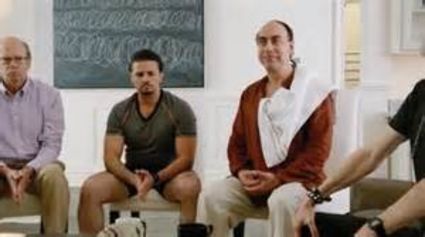 "Welcome to the Men's Group" is a dramady chronicling one day in a monthly Sunday morning meeting of an all-male support group. The film is co-written, co-produced, directed, and co-stars Joseph Culp, the son of actor Robert Culp (who co-starred with Bill Cosby in the hit 1960s TV series, "I, Spy"). "Welcome to the Men's Group" also stars Timothy Bottoms, Stephen Tobolowsky, David Clennon, Mackenzie Astin, Terence Rotolo, Ali Saam, and Phil Abrams.

The premise of the film is fairly straightforward – put eight broken, middle-aged men in a room and force them to be completely honest about how utterly miserable and unsatisfied they are with themselves and their lives, and maybe, through this admission, they can start to make peace with the heteronormative stereotypes of the ideal man, husband, and father, that society, and they themselves, expect them to be.

Both humorous and sobering, the film tackles a slew of men's issues: parenthood, masculinity, divorce, impotence, depression, grief, loneliness, sex addiction, shame, suicide, trust, competition, and, most importantly, failure. The film rips open Pandora's Box and exposes these men as they really are – naked, alone, and cowering in the shadow-side of the masculine archetype. It is only through brutal honesty and camaraderie that they can begin to heal.

Nudity is a central theme of this movie. As the men peel off the onion skin of lies, distrust, and dissatisfaction that is entombing them, so, too, do they need to metaphorically (and not so metaphorically) strip off their clothes and see themselves and each other as they really are.

"Welcome to the Men's Group" is playing at Laemmle's Music Hall 3 in Beverly Hills through Thursday, May 24.