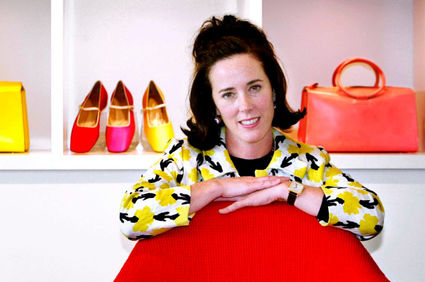 Fashion designer Kate Spade hung herself with a Kate Spade scarf. First Responders found the fashion maven hanging from a doorknob and a scarf in her Manhattan apartment. She was 55 years old and suffering from clinical depression, for which she was taking medication.

Spade hanged herself with a scarf on a doorknob in her apartment and was found by a housekeeper around 11 a.m. Tuesday, Police said.

Kate Valentine, formerly known as Kate Spade, was an American fashion designer and businesswoman. She was known to suffer from depression.

Spade was the namesake and former co-owner of the designer brand, Kate Spade New York. In 2006, she sold the last of her shares in that company. Wikipedia

Brosnahan was born in Kansas City, Missouri. She graduated from St. Teresa's Academy, an all-girl Catholic high school. She attended the University of Kansas and then transferred to Arizona State University, joined Kappa Kappa Gamma, and graduated with a degree in journalism in 1985. She was of Irish descent.

In 1986, she worked in the accessories department of Mademoiselle in Manhattan, where she was credited in the magazine's masthead with her maiden name as Katy Brosnahan. While at Mademoiselle, she moved in with Andy Spade (brother of actor and comic David Spade), a native of Scottsdale, Arizona. The two had worked side-by-side as salespersons in a men's clothing store, Carter's Men Shop in Phoenix. Together, they were featured in the magazine as part of a photo story on couples in love.

She left Mademoiselle in 1991, with the title of senior fashion editor/head of accessories. While working for Mademoiselle, she had noticed that the market lacked stylish and sensible handbags, and she decided to create her own.

In 2004, "Kate Spade at home" was launched as a home collection brand. It featured bedding, bath items, china, wallpaper and various items for the home. She also shared about her personal style and philosophies in her three books: Manners, Occasions, and Style. The brand went international in 2004, when a store was opened in Aoyama, Tokyo, Japan.

Spade was co-founder and designer of Frances Valentine, a handbag and footwear brand that launched in February 2016. In 2018, to celebrate the 2 year anniversary of her new brand, Frances Valentine launched a new campaign called "Where is Kate?" that includes a short film produced and directed by Andy Spade.

Spade married Andy Spade, the brother of actor/comedian David Spade, in 1994. The couple has one child, Frances Beatrix Spade, born in February 2005. Her niece is actress Rachel Brosnahan. 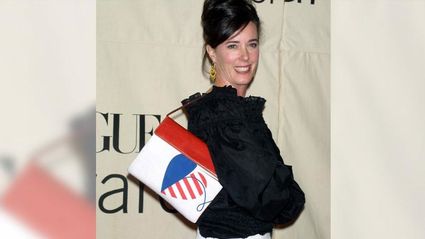 Kate Spade, 55 hangs herself with a Kate Spade branded scarf

Kate Spade New York has over 140 retail shops and outlet stores across the United States, and more than 175 shops internationally. Their products are sold in more than 450 stores worldwide. The company grew to include retail outlets as well as selling their products through such high-end stores as Bloomingdale's, Saks Fifth Avenue, and Neiman Marcus.

WHAT possessed you to add those scarf photos and those captions to this story? This is the opposite of journalism. I am a 25-year veteran writer, editor and reporter and this is the lowest move I have seen. Who chose those (likely swiped) photos? Who is the editor on this piece?

What is wrong with you - publishing all these pictures of her scarves?? And do you think that is the news - that her suicide was committed with one of her scarves? The news is that she killed herself, you idiots.

''Fashion designer Kat Spade''. At least get her name right. You don't even have the common curtesy of being respectful of the tragic death. It is the utmost disrespecting article I have ever read, not the mention the horrible writing skills. There are some things that should not be included let alone repeated an unnecessary amount of times.

Heartless story. You must know this life ending tragedy effects many every day yet you chose to include specific images here. That’s horrendous. Shame on you.

Horrifying and disgusting that you would show an image of a woman wearing a scarf. This is vile and not journalism.

Completely agree with prior comment - this was utterly revolting - seeing those scarves drove home the point that one of Spade's friends made upon hearing the news of her death -- that people just don't care about one another anymore. Ypu people who wrote this and threw in the scarf pictures are the most devoid of heart - I will never return to this site and I will always remember your callousness. U need to retract and apologize

How many more deaths do we need to hear about when people are given these mind altering drugs that push them over the edge in which they would never ever do in real life no matter how sad you are. Instead of helping balance the hormones with nutrition (yes nutrition!) we put them on a roller coaster ride with horrible psychotic drugs. They are in a black hole most of the time. We need exposure and some real media to shed light on this and put these doctors on trial or better yet shut down these practices. BIG PHARMA, that is you! Robin Williams, Chris Cornell come to mind. Little people cannot use their voice. We need accountability. Check out Kelly Brogan, MD for her change of treatments for her patients. She saw the dark side of her patients and wanted to help and she is doing just that.

Class it up, you a-holes. Mentioning that she was found with a Kate Spade branded scarf? And in every photo as well as multiple times in the so-called story? WTF?? Have some compassion and report with some dignity. Jesus Christ. Did a jackss millenial write this crap?