At SMC, a Historic Celebration of First-Ever Bachelor's Degree Graduates 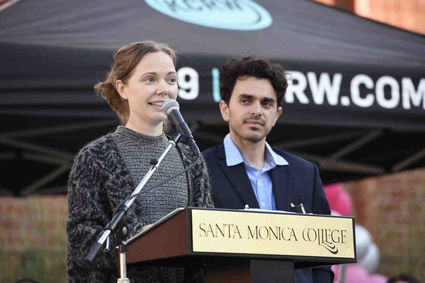 SMC Bachelor's Degree graduates Amanda Sanchez (left) and Orhan Basak speak about their experiences in the program and what brought them to Santa Monica College. Sanchez came to SMC in 2013 when she "traded Stockholm for LA" and Basak, who immigrated from Turkey when he was ten, did not initially think of college as he was immersed in helping run a family business and he did not want to go into debt. (Tuition for SMC's four-year program is approximately $10,000 tuition at four-year private institutions that offer comparable programs can cost roughly $160,000).

Santa Monica College (SMC) held a "SMC Interaction Design Grad Show," a celebration of the college's first 18 students to earn a Bachelor of Science degree in Interaction Design (IXD). The event - both a showcase of students' portfolios and an industry mixer - was held on Thursday, June 7 from 5 p.m. to 7 p.m. at the SMC Center for Media and Design at 1660 Stewart St. in Santa Monica.

SMC's Bachelor of Science degree was designed to impart fundamental skills in interaction design, a field that blends user experience (UX), design, and technology. The students spent their first two years studying graphic design, and the last two immersed in upper-division interaction design courses, as well as related coursework in computer science, business, cognitive psychology, and media, among others. It is the first baccalaureate degree of its kind to be offered at a community college.

The Interaction Design program was launched after SMC was selected by the California Community Colleges Board of Governors in 2015 to be part of a historic pilot program. Under the pilot, selected two-year colleges would offer four-year degree programs in a field where there was demonstrated local need and that were not offered at a California State University or University of California campus. For more details on the Interaction Design program at Santa Monica College, visit ixd.smc.edu.

Santa Monica College is a California Community College accredited by the Accrediting Commission for Community and Junior Colleges (ACCJC) of the Western Association of Schools and Colleges (WASC). SMC is the leading transfer college to the University of California campuses, the University of Southern California, and Loyola Marymount University; SMC also offers career training options in over 80 fields of study.

IXD-10.jpg: Dr. Kathryn E. Jeffery, SMC Superintendent/President, during an address to the graduates and crowd at the IXD Grad Show on June 7, 2018.

IXD-4.jpg: Around 250 guests-including representatives from nearly 100 organizations including tech and entertainment companies, universities, and industry trade organizations-check out the booths showcasing the thesis projects of SMC's Bachelor of Science in Interaction Design graduates. 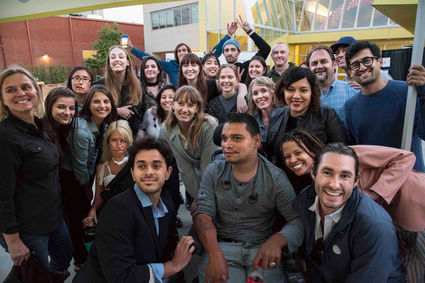 The first 18 students to graduate from Santa Monica College with a Bachelor of Science degree in Interaction Design (IXD) pose with some friends and well-wishers at the IXD Grad Show on Thursday, June 7 at the SMC Center for Media and Design at 1660 Stewart St. in Santa Monica.

IXD-5.jpg: Graduating SMC student Ana Massette in her booth at the IXD Grad Show held June 7. Massette, who is from Brazil and wants to use her design skills to teach compassion, made a giant "Jenga" game with sentences that began with "What would it feel like to...." while individual blocks completed the sentence.

IXD-6.jpg: SMC trustee Rob Rader and his children Zora (right) and Dash (left) check out an interactive immersive experience designed by SMC Bachelor of Science degree graduate Michael Coty. The installation-called "Basri" and made possible with the support of Muslims for Progressive Values-featured an immersive 360-degree video projection of Islamic design patterns manipulated in real time through a custom-made interface.

IXD-8.jpg: An SMC Bachelor's Degree graduate (right) talks about her thesis project, which involved working on ways to improve the shopping experience at thrift stores.