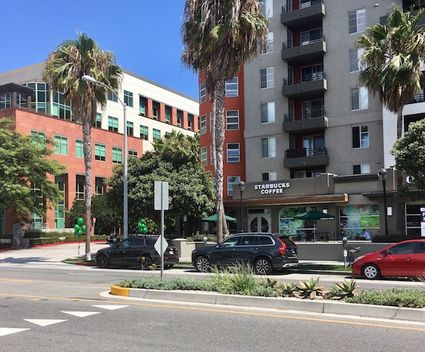 Santa Monica Block apartments across the street from the DMV

It is widely understood that despite local laws, Tenants rent out their Santa Monica units on Air BNB and other apps. If a tenants puts one apartment online, he's unlikely to be prosecuted.

The danger is that tenants will be replaced by vacation rentals. The NMS built properties along 7th street in Downtown SM, for example, are almost entirely occupied by AirBNB lessors. Call it an inconvenient troop.

"Jafri had been charged with operating his illegal vacation rental business without City Permits and refusing to comply with City Administrative Citations," said a City Attorney press release.

When the case first began in early 2017, Code Enforcement Officers first issued Administrative Citations to try to get compliance, which is typical.

"Instead of coming into compliance, Jafri continued to operate his illegal vacation rentals within various residential dwelling units within the City, and he employed various tactics to deceive City investigators," said the press release.

The City Code Enforcement Officers pretended they were Air BNB vacationers, set up Jafri for prosecution by the City Attorney early this year.

On June 13, 2018, City Prosecutor Melanie Skehar took the "no contest" plea of Shabi Jafri to five misdemeanor counts of operating an unlawful business within the City.  Under a plea agreement with the City Attorney's Office, the owner was placed on formal diversion with 24 months of probation and ordered to:

Pay restitution to the City of Santa Monica in the amount of $3,600.25 in investigation costs.

Comply with all laws, including the City's Home-Sharing Ordinance's prohibition against hosting, facilitating, aiding, or advertising a vacation rental in the City.