"Families belonging together: Freedom for Immigrants," at City Hall in downtown Los Angeles

Rally June 30th 75,000, and thousands of others to six other LA County Rallies 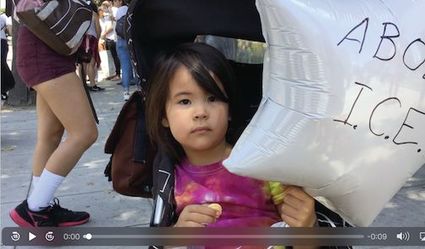 "Abolish ICE," one of the ubiquitous themes at the downtown Los Angeles rally on Saturday, was written on banner signs the protestors waved high above their heads as they marched to the Federal Building.

Sat, June 30th, the rally to end the mass detention of immigrants, "Families belonging together: Freedom for Immigrants," began at City Hall in downtown Los Angeles. Protesters then marched together to the Federal Building and the Downtown Los Angeles Metropolitan Detention Center.

The event began at 11 am and ended approximately 4 hours later. Approximately 75,000 protesters attended the rally, making it the largest Families Belong Together demonstration in Los Angeles. There were also several other smaller rallies in the Los Angeles area including, Redondo Beach, Long Beach, San Bernadino, Burbank, and other places in and around the county.

The resounding message besides equal rights for immigrant families, was to abolish ICE and to get out the vote.

Across the nation, in major cities such as New York, Boston, LA and others, over 700 rallies were held to protest Trump's Zero Tolerance practice of separating   the migrant children from their parents.

"Families Belong Together" was sponsored by a variety of activist organizations, including CHIRLA, MoveOn, Woman's March LA, ACLU of SoCal, and other groups. The event aimed to give voice to immigrants and refugees and to show support from native-born allies who reject the Trump Administration's racism and xenophobia.

Some of the protesters from The Families Belong Together group came face to face with a group of counter protesters who waved Trump flags and sported MAGA hats, in front of the Los Angeles Metropolitan Detention Center, on Alameda Street.

Although the counter protesters supported ICE, many also said that they agree with Trump's Executive Order to stop the separation of families.

Trump recently signed the executive order to end the practice of separating children from their parents when they illegally cross the U.S.

border. It is yet, however, to be seen when the children will be reunited their parents.

A federal judge in Southern California, Dana Sabraw, a couple of weeks ago, ordered immigration agents to stop detaining parents apart from their children. Sabraw's decision requires all children under the age of five to be reunited with their parents by July 10th, and all children over five to be back with their parents by July 26th. There has, according to CNN, been no progress on reunification as of yet.

According to Department of Health and Human Services, six migrant children of the 2053 that were separated from their parents have been reunited with their families.

Looming over Trump's Executive Order is the conflict with the decades old Flores settlement and its subsequent ruling during the Obama administration that limits the childrens' detention to 20 days.

In the midst of the over 700 rallies across the nation on Saturday, Trump reacted with one of his tweets.

·       "When people come into our Country illegally, we must IMMEDIATELY escort them back out without going through years of legal maneuvering. Our laws are the dumbest anywhere in the world. Republicans want Strong Borders and no Crime. Dems want Open Borders and are weak on Crime!"

·                        "Abolish ICE," one of the ubiquitous themes at the downtown Los Angeles rally on Saturday, was written on banner signs the protestors waved high above their heads as they marched to the Federal Building.

Even a nine-year old boy was holding a balloon with the words, "Abolish ICE" printed on it.

The boy, Reilly Ross, who was at the rally with his parents and who told me that he'd been interviewed before on TV, was ready to talk, as he weighed in on his take on Trump.

He said, "I think what Trump's dong is not good. He's taking families apart, and building a wall to stop people from coming into America where they want a life better for their children and themselves.  He added, "I don't think he's being kind I wish he'd get the children and put them back with their families."

Family unity was another important theme at the rally. Many of the people at the rally, like Reilly, came to support the reunification of immigrant families together with their families to express solidarity.

Protesters raised signs high up the air with a variety of different slogans that expressed their disapproval of Trump's Zero Tolerance policy and their desire to see migrant children reunited with their parents.

Here's a sampling of the signs:

RETURN THE CHILDREN OF ALL THE FAMILY MEMBERS

LEGAILTY IS NOT A GUIDE FOR MORALITY

KIDS BELONG IN FAMILIES NOT IN CAGES

One of the demonstrators spoke about why she was at the rally. Merlin Gumm is an immigrant from Honduras who came to the United States in 2007 on a college scholarship. Ms Gumm's parents still live in Honduras near the state of Colon. They own a small banana plantation and sell their bananas to Standard Fruit Company, which is an American company that exports the bananas to the United States. Ms. Gumm explained that her parents make very little money since Standard Fruit doesn't pay them much for the produce.

Gumm also talked about how it is more the violence than the poverty that is causing the Honduras people to flee their country. "They come here because they are afraid," she said, and she emphasized that they fear for their lives. She said, "Especially women and children, have no protection from the government. If you go against a gang member, the whole gang will come for you."

Gumm's ultimate goal, and why she came with her American husband to the rally, is for people to know, "As a Honduran we are not as they portray us. We are not animals. Those people are fleeing their country because of the violence. People that are coming to the border need compassion, to be understood, need help; they are not trying to take over anyone's jobs. They just want to be part of society that is accepting, caring and kind and feel safe. They are trying to give their kids a better life and a better future."

While speaking, Ms. Gumm's face welled up in tears, as this was a very emotional experience for her. She concluded the interview by saying, "Either they throw you in jail, treat you like an animal or they kill you. "

She explained that it's either this(separating the children from parents at border) or that(staying in Honduras to be killed).

Ms. Gumm does have a shard of hope that she expressed when she said, "I'm so proud. I see so many people from different backgrounds coming together for one cause." 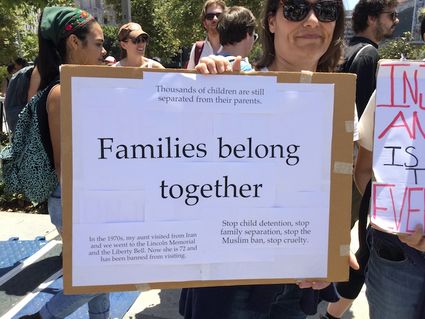