Germany's world cup failure blamed on Özil, despite his stellar record over his career 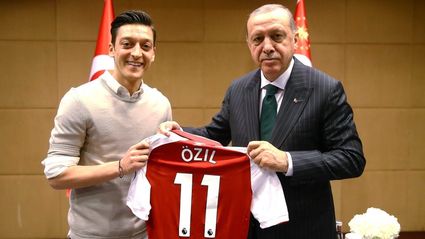 Turkey president Recep Tayyip Erdoğan says today in Ankara that he is glad with Mesut Özil's stance: "I called him on Monday night and we talked. They simply can't stomach the fact that he took a picture with me. His attitude was natonalistic. I kiss his eyes and I stand by him"

One of the most scandalous stories to hit the soccer world was yesterday's news surrounding mid-fielder Mesut Özil's departure from the German national team due to "racial and disrespect". A shocking departure following the 2018 world cup in Russia, of Arsenal star Özil, who also played for Germany and is of Turkish descent.

In a statement, Özil writes: " It is with a heavy heart and after much consideration that because of recent events, I will no longer be playing for Germany at an international level whilst I have this feeling of racism and disrespect"- Mesut Özil.

There may have been accusations that Germany's spectacular failure this world cup can be blamed due to his poor performance. But it seems ludicrous. The German team lost because they played poorly and lost as a collective team. No one player can be blamed and management and coach are equally at fault.

He made a spectacular statement" When we win, I am German; when we lose, I am an immigrant". The issue here is not one of his performance, but a much deeper issue of racism and abuse.

It all started in may 2018, when Özil met and posed for photography with Turkish President Recep Tayyip Erdoğan and signed a t-shirt with the words "For my president". Ozil was quick to justify that this was a courteous gesture on his part and he was not making any sort of political endorsement saying that "It would have been disrespecting the roots of my ancestry", had he not made the gesture. But the photo did not go down well with German media and the German Football Association (FA) who heavily critized it and left Özil out for a lot of the pre- world cup promo activities.

It is a sad day for Germany because this idea of an integrated German team, one that is inclusive, diverse and respectful is under attack. The fact that one of the most high profile players does not feel comfortable in representing the national team makes it a huge story. Özil has always claimed that he has two hearts: one German and one Turkish.

However these are very tense times for Germany regarding race tensions and a story like this falls right into the arms of those who wish to use it for political gain. It is a shame to see far right parties like the AFD, use this as a part of their identity politics strategy in an attempt to showcase that diversity and immigration simply don't work. Yes, there are serious issues with immigration and refugee influx especially where there is no integration or assimilation on the part of those who take refuge. And in many ways this human refugee experiment has failed Europe and especially Germany creating all sorts of internal conflicts and tensions.

But with Özil, this is hardly the case here. Far from bring a refugee, he was born in Germany as was his father, speaks perfect German, grew up here and for all intents and purposes is very German, he is an example of diversity that has triumphed not failed.

What makes things worse is that other foreign players in the German national team like Miroslav Klose and Joseph Podolski are always referred to as German and not German- Polish and yet Özil was always German- Turkish, because of his muslim heritage.

For someone who has worn that German jersey 92 times scoring 23 goals internationally, being a vital part of the 2014 team that lifted the world cup trophy and who has been German player of the year 5 times, this is a sad ending to a wonderful career. He has done a lot of charity work and has been a great role model on and off the field but all of this seems to be of little significance and consequence for some in the German media and FA.

There have been mixed reactions; from a global outrage for soccer fans around the world who applauded Özil for standing up to racism, to some saying German Football is better off without him, to some in the German Football Association downplaying it and reducing it to poor performance instead of a much more larger, sensitive race problem and to some who realize something precious has been lost.

The German FA seems to downplay the racial issues and condensing it to Özil poor performance in recent times. The Bayern Munich President, Uli Hoeness, and the German FA have been harsh to come back with scandalous quotes that Özil performance has slumped in the recent past and that he does not belong on the national team. It blames Germany's world cup failure down to one player and seems to erode Özil's stellar record over his career. You may not think he was playing his best soccer in recent times but a total ignorance over the racial issue is very reckless for Germany moving forward.

It shows wanted disregard for a serious issue of racial tensions not just in the team but the nation as well. It shows a lack of understating the difference inherent in a player and shoving that difference back into their face rather than protecting them from various racial abuses and mistreatment, subtle, as they may have been. Perhaps this shows the deeply embedded racism that still exists within the DFA and in Germany. How does this effect the future mesut Özil who dream of playing for Germany; they may now think twice. Time will only tell.

Mesut Özil will continue to play for English club Arsenal and possibly create more history there but the real loser here is German football. 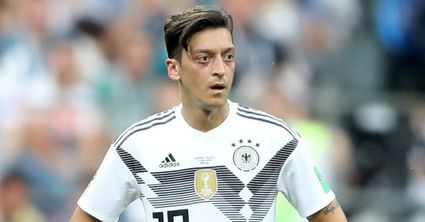 Once a hero, Mesut Özil's now just a scapegoat for racists. And his suddenly abbreviated Germany career serves as a microcosm of Europe's shifting stance on immigration.