Across the USA, UFO sightings go with the 4th of July like hot dogs and fireworks

Hundreds of witnesses saw strange lights in the sky over Denver's 4th of July celebration in 2017. UFOs? Aliens?

UFOs again appeared above Denver on July 4th, 2018. Across the United States, UFO's are seen by hundreds of witnesses every 4th of July, and the Mile High Stadium is a regular venue for space aliens.

Every 4th of July, skydivers are confused by some as Unidentified Flying Objects. But still other see visitors from another world. Reports of UFOs are generated each independence day. The 4th of July UFO are a strange variety of unidentified flying object (UFOs) that were seen all across the country by hundreds of witnesses on July 4th of 2013, 2014, 2015 and 2017 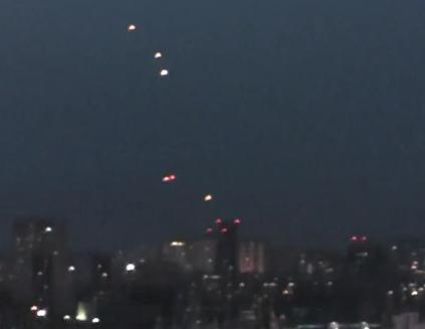 Hundreds of witnesses saw strange lights in the sky over Denver's 4th of July celebration in 2017. UFOs? Aliens?

Would extra terrestrials be attracted to 4th of July celebrations, or repelled by them? Are they war mongers or internationalists? Did they vote for Hillary or Donald Trump? And how did aliens even register to vote, without proper ID? These and other questions remain unanswered..

The objects were described as being incredibly faint red-orange flashing lights inside a globe that hover in unusual patterns high up in the air without making noise. Often times there were multiple seen at one time in the sky.

Even fact checking website Snopes.com says that the story of a UFO seen disappearing into a portal over Colorado, is "unproven" rather than false. https://www.snopes.com/fact-check/ufo-portal-colorado/

Among the dozens of fireworks displays in the metro area on July 4, several strange hovering lights over Sports Authority Field at Mile High sparked some suspicion that UFOs paid a visit.

I saw the same thing in mid february of 2018 in Denver. my GF and I were walking in Rino right near where livwell is and we saw that same exact thing in the sky. they looked like massive flames that were spiraling, they were appearing and reappearing in different #'s as well. i took a 30 second video that i haven't shared with anyone because i am worried people won't believe me. my friend sam works up in the yukon with squirrels and bunnies (for a research masters degree) and he was setting up cages one night in the woods to tag the critters and release them. he told me the northern lights were beautiful and mesmerizing that night and moving incredibly quickly, like a river he described. All of the sudden when he got to a clearing, the northern lights seemed to disappear completely at once, and a red dot appeared in the sky, it slowly turned into 6 different red dots that spread out in the shape of hexagon, then coming together again to shoot out in the darkness. What is here.

My date and I were on the roof of his house watching the fireworks and we actually saw these phenomena in two different locations. We had a view of the entire Denver Metro Area, so after the first set of lights faded , which were to the North, we saw them again right over Mile High Stadium. We're gonna go on the roof again this year, but this time we'll take the binoculars and the video camera! We wondered if they were drones, but drones could not get from point A to point B that quickly!

We saw it too and we were basically right under it. This was no skydiving team. Who jumps into exploding fireworks anyways ? We thought it was a drone, but it was much too big and then 3 other points lit up and just hovered there not moving at all then completely vanished . I haven’t heard any other logical explanation at this point, so my theory is that there’s other planets out there who are ahead of us in technology and are giving intergalactic tours to the highest bidders, and what better night than when we shoot small explosions into the air ?

Could they be paper lanterns?

My wife and I live in Cape Cod, Massachusetts and on July 4, 2018 we went out to the beach to watch the fireworks display and we looked off to the left out over the ocean and we saw a bunch of UFOs ranging in size and shapes, from triangles to saucers to flashing lights to Orbs, it was amazing!!! And although we had just our iPhones, yes we did take pictures and yes we did get video!

I've seen this last night also. I was amazed and yeah it was weird. I saw about 4 lights. I didn't have my phone to record it.

I saw this last night too!! Got it on video looks very similar to the posted video

I've seen the gold-ish lights twice now in Denver, once I think either 2016 or 2015 on 4th of July, and again this evening. There were four or five of them, flying in close formation but more like a school of fish than an actual formation. Very weird. I wonder if anyone's gotten any close up photos or videos?