Jenna was in a relationship she hated and yet she was now pregnant. What would she do, what could she do?

The Waitress' : A Musical in Review 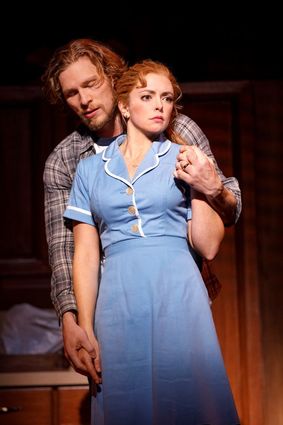 The show opens in Joe's Diner located somewhere in Dixie. The owner, Joe is a gruff but honest man and his three waitresses are portrayed in a fairly typical perhaps even stereotypical way but then the story begins to develop.

Jenna [Desi Oakley] is a master pie maker and a big part of the success of Joe's Diner but she is stressed because poor Jenna is in a very abusive marriage and she comes to learn that she is pregnant. Her coworkers Becky [Charity Angel Dawson] and Dawn [Lenne Klingaman] have their own issues and clearly the shop owner Joe [Larry Marshall] is under pressure, yet there is a real camaraderie revealed in action and song. Jenna becomes concerned about her pregnancy and goes to see her doctor, but the doctor she expects to see is not there and she is seen instead by a handsome young doctor Pomatter [Bryan Fenkart] and instantly there is a spark of something more than just a doctor/patient relationship.

All of this is told in large part through the sensational music of Sara Bareilles. As I watched Act One unfold I admit that I was at first somewhat underwhelmed but that changed quickly and powerfully. It became evident that Jenna was much more than simply a pie maker and waitress and Joe had a far deeper soul that you might at first suspect. As it always does in a great performance far larger issues soon began to develop. Jenna was after all in a relationship she hated and yet she was now pregnant with the child from a man she did not want. What would she do, what could she do? The other people at Joe's Diner had their own personal issues to resolve and even Earl [Nick Bailey] the abusive husband was inescapably involved. 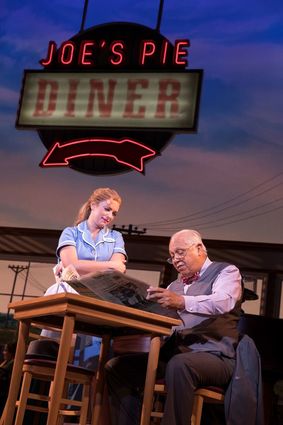 By the end of Act One there were so many questions. Would Jenna go through with having the baby? What role would Dr. Pomatter play in Jenna's future? Would Jenna take a pie baking challenge which if she won could give a huge financial boost? What would be the future for coworkers Becky, Dawn and Joe? It was a fabulous set-up delivered with superb performances across the board. It was clearly deeply rooted and real life, an understanding of what pretty much everyone has had to deal with in some way during their own lives. In other words. "Waitress" is a very relatable story that touches everyone who sees it on stage. There is, of course, plenty of action and drama in such classic musicals as Les Miserables but most who see that great show simply cannot relate to it in the way and to the degree most folks can with "Waitress" and that is why in my opinion "Waitress" is a super hit today and will ultimately be viewed as a true classic. So my super kudos to the entire cast and crew and to six time Grammy nominee Sara Bareilles and to Jessie Nelson.

"Waitress" Is playing at the Pantages Theatre, now through August 26th with show times Tuesday through Fridays at 8:00 p.m .; Saturdays at 2:00 and 8:00 p.m. and Sundays at 1:00 and 6:30 p.m. You may purchase tickets here: https://www.hollywoodpantages.com/events/detail/waitress.