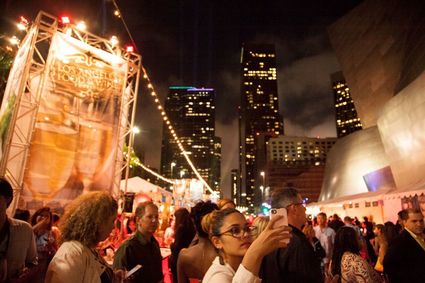 Other marquee events include three evening strolling receptions hosted by chef luminaries at the event's downtown hub along Grand Avenue which also include live performances.  The series kicks off with Ultimate Bites of L.A. on Thursday, August 23. Hosted by Alvin Cailan & Antonia Lofaso, the event brings together some of the city's celebrated restaurants battling for the title of Los Angeles' "Ultimate Bite". The chef with the most votes will be featured at Pebble Beach Food & Wine in April 2019. With all that marquee talent, the battle sounds fierce indeed.

On Friday, August 24, 7:00p - 10:00pm, LAFW's signature event of past years, Night Market in Downtown Los Angeles, is replaced with a new event Heat on the Street on Grand Avenue that will be hosted by he two 'Bad Hombres' Aarón Sánchez and Robert Irvine along with Santa Monica's 'Too Hot Tamales' Mary Sue Milliken and Susan Fenniger. The Friday Fiesta will feature twenty chefs from LA and across the country focusing on Latin cuisines: tacos, carne asada, ceviches and nopalitos paired with cervezas, tequila, and wines. Mucho gusto!

The Saturday August 25 7pm block party on Grand Avenue brings another lineup of star chefs, stellar wines, craft beers and cocktails. It will be hosted by restaurateur, cookbook author and television personality Chef Curtis Stone and Tiffani Thiessen, star of Saved by the Bell, Beverly Hills 90210 and The Cooking Channel's Dinner at Tiffani's. Music will be spun by DJ Questlove, known for his Grammy Award-winning band The Roots, and his role on The Tonight Show Starring Jimmy Fallon.

The power lunch series returns on Friday, August 24. Antonia Lofaso teams up with New Orleans' Aarón Sánchez for a four-course lunch at the highly-anticipated DAMA at City Market South in the Downtown fashion district.

Chef Michael Reed from Osteria Mozza and Sona teams up with Food Network's Robert Irvine at Viviane in the Avalon Hotel Beverly Hills.