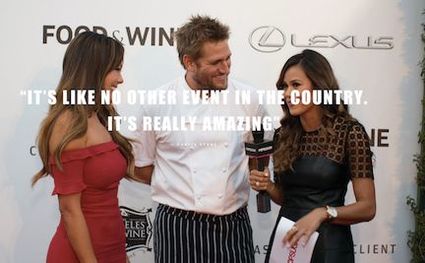 The real opening act of the LAFW will begin on Thursday the 23rd August for "The Ultimate Bites of LA" hosted by celebrity chefs Alvin Cailan and Antonia Lofaso.

The Los Angeles Food and Wine Festival will take flight on the 22nd to 26th August and is set to have overwhelming success taking place over 2 different locations, Downtown Los Angeles and Santa Monica Barkar Hangar.

Spanning over 4 days, Angelinos will be treated to a scrumptious food and wine fiesta this year. This remarkable event offers the opportunity for guests to go on a food strolling adventure and have access to book signing and photo sessions with some of the world's best chefs.

The Barker Hangar at Santa Monica Airport will house the Grand Tasting events of this years' LAWF on Saturday the 25th and Sunday the 26th August. Every year, during this time, this space is transformed into a decadent food and wine experience. Often touted as one of the best foodie cities in the US, perhaps eve the world, this year's festival showcased an international showcase of incredible bites and pours.

Sponsoring the event again this year, Lexus is set to dazzle the guests with their latest car models offering photo opps. The Lexus LAWF has become synonymous with quality, innovation and decadence and this year, it did not disappoint one bit.

The LAFW kicks off with a "Kick off Dinner" series on Wednesday, the 22nd August. These include Dinner at LASA with chefs Chad Valencia and Jon Yao, Dinner at Big Boi with Chefs Barb Batiste and Alvin Cailan and finally Dinner at Tesse with Chefs Raphael Francois and Sally Camacho- Mueller.

The real opening act of the LAFW will begin on Thursday the 23rd August for "The Ultimate Bites of LA" hosted by celebrity chefs Alvin Cailan and Antonia Lofaso. This night brings together chefs from Downtown, Westside, Hollywood and MidCity/Beverly Hills – to participate in the "Ultimate Bites of LA" walk-around tasting event. Event guests will have the opportunity to sample dishes from several of the city's most exciting culinary neighborhoods.

Friday night will host the sizzling "Heat on the Street" event hosted by Chefs Aaron Sanchez, Mary Sue Milikan, Susan Feniger and Robert Irvine. The "Two Bad Hombres" will be teaming up with the "Too Hot Tamales" and they know all there is to know about throwing down some seriously host, tasty food.

The Grand Tasting event on Saturday will be held in the Santa Monica Barker Hangar. 25 celebrity chefs will showcase their culinary skills and you can sample their decadent offerings along with over 200 brands of spectacular wines. This event will be hosted by chefs Michelle Bernstein, Hugh Acheson and John Tesar.

Saturday evening will be host to "Saturday LIVE" event where you will be graced by the presence of celebrity Chef Curtis Stone and Actress Tiffani Thiessen. DJ Questlove will be spiing the tunes and there will be beers, cocktails and delicious wine to be enjoyed by all.

The LAFW ends with the LEXUS Grand Tasting event on Sunday at the Barkar Hangar again. This time hosted by chefs Curtis stone, Michelle Bernstein and Alex Seidet. The event will feature over 200 wines from some of the world's most prestigious wineries. 25 celebrity chefs showcase their culinary skills to provide decadent samplings of their menu items. During this remarkable strolling event you will have access to book signings and photo sessions with some of the weekend's biggest chef celebrities.  Don't miss this great opportunity to experience food and wine at its best. 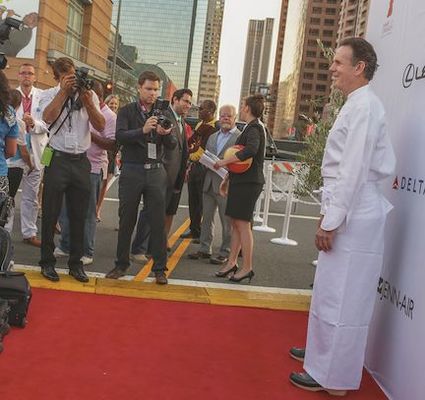 This night brings together chefs from Downtown, Westside, Hollywood and MidCity/Beverly Hills – to participate in the "Ultimate Bites of LA" walk-around tasting event. Event guests will have the opportunity to sample dishes from several of the city's most exciting culinary neighborhoods.

Along with Lexus, The Venetian Hotel and Resort in Las Vegas, CHASE Bank, The Wall Street Journal, The belvedere, Westin Verizon and Yelp are all among the many premiere sponsors this year. Some of the Wine and beverage brands include Golden Road Brewing, Landmark Vineyards, Vin De Bordeaux, GoVino, Guinness, Bulleit Whiskey, Angry orchid, and Monkey shoulder, Glenfiddich, Don Julio, Pellegrino, Aqua Panna and Hendricks Gin. They were showcasing their resorts, fine dining restaurants. A huge turnout with guests is expected enjoying great food, music and giveaways courtesy of the sponsors.

To conclude, this years' Los Angeles Food and Wine Festival will be a massive success with an overwhelming turnout who enjoyed the food, wine and the great Angelino sprit to the highest standards. Do not miss this incredible event next year!