Food on a stick. A parade. Rides. Stuff for sale. Bands. Dancers. You know, a Fair. 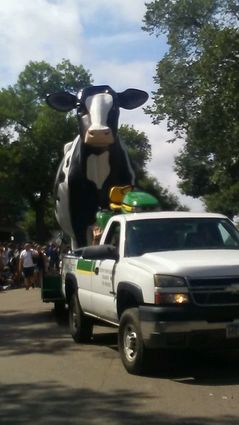 A big plastic cow at the Minnesota State Fair, 2018

The state fairgrounds, adjoining the Saint Paul campus of the University of Minnesota, are in Falcon Heights, Minnesota, midway between the state's capital city of St. Paul and its largest city, Minneapolis, near the Como Park and Saint Anthony Park neighborhoods of Saint Paul. Residents of the state and region come to the fair to be entertained, exhibit their best livestock, show off their abilities in a variety of fields including art and cooking, learn about new products and services, and eat many different types of food-often on a stick. The fair runs for twelve days from late August into early September, ending on Labor Day. The Minnesota State Fair was named the best state fair in the United States in 2015 by readers of USA Today. 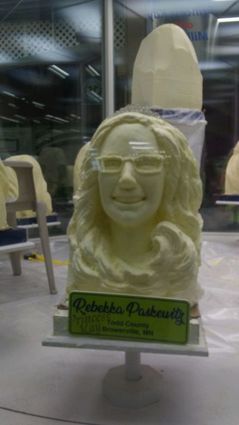 A butter sculpture at the Minnesota State Fair, 2018

The Minnesota State Fair is one of the most popular tourist attractions in the area. Around two million people attend the Fair annually[6]. Attendance in 2017 was a record 1,997,320 people. The highest daily attendance in the history of the fair was 270,426 visitors on Saturday, September 1, 2018.

One of the first annual events to occur is the creation of a butter sculpture. Each year, a new Princess Kay of the Milky Way is selected to promote Minnesota's dairy industry. Part of the job involves posing for several hours in a walk-in, glass-walled refrigerator as a 90-pound block of butter is carved into a head with her likeness. Butter makers started sculpting their products at the fair as far back as 1898, although the head-sculpting tradition didn't begin until 1964.