"I'm Human, Your Human, There Human." Sign at a rally 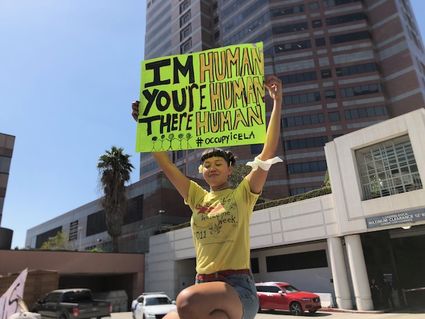 "I'm Human, Your Human, There Human." Sign at a rally to abolish ICE

Gleeson had joined activists at the event, hosted by Occupy ICE L.A. and ten other grassroots groups so that he could learn more about the Abolish ICE movement.

Protesters and activists mobilized to occupy the detention facility, and chanted, "Abolish ICE and the police, we won't stop till the children are released." They were gathered just outside the Alameda Street entrance while a white Federal Protective Service Police van weaved through the entrance driveway. Sirens screamed. Several DHS agents surrounded the protestors and said that they were blocking the driveway and to clear the way.

Protestors chanted, "Quit Your Job," "Nazis," and "Cops, Pigs, Murderers." An organizer from Black Lives Matters said he wanted to abolish ICE and the police.

Gleeson watched the police vehicle weave through the driveway observed the Haig push Ryanna, one of the activists, and stopped to intervene.

Haig, Gleeson said, grabbed his arms pushing him away from the vehicle into the crowd.

Gleeson said, "He grabbed my wrist and I said, "please don't touch me." He was told by Haig that he had assaulted a police officer by moving his hand away. He grabbed his wrist again and again.

Haig, along with his partner, Agent Jason Lynd, who had been surveilling the area, grabbed Gleeson's hands and led him into the building as the protesters chanted, "Let him go!"

According to organizer Jeremy white of California for Progress, that Agent Lynd purposely ran over the Occupy ICE L.A. altar that was by the third entrance driveway of detention center, crushing the candles.

When Gleeson was brought into the detention facility, the officers pushed his head up against the wall. He noticed later that there was dry blood in his ear. They hand cuffed him so tightly that he still has abrasions on his wrist.

Gleeson was placed in a holding cell alone without any water, for about four hours, remaining hand cuffed and wasn't even given water to drink. He said he had asked eight or nine times for water until someone finally brought him some.

After waiting at the detention facility for over four hours, Gleeson was finally released. He was charged with a misdemeanor, issued a citation for disturbing the peace and obstructing the sidewalk.

He also said, "When I asked questions they responded with, 'look who thinks they know the law, you better read up they have changed.' When I asked to read my rights and what I was being detained for, they ignored me with lines like that."

What Gleeson learned about the detention facility was that there were multiple agencies there and they had their own court and that he will have to go their court for his proceedings in October.

Gleeson was released at about 7 p.m. the night of his arrest and his citation was on a Los Angeles Police Department "Notice to appear" form, even though it was signed by Agent Haig of DHS.

The agents, Gleeson said, who had also been in the marine corps, apologized once they learned that he too had served in the marines. Gleeson said they were even stationed the same area he was. He also said, they told him "We are just doing our job, nothing personal."

Gleeson's court date is set for October 3rd and he was also issued a fine of $300.

Three other protesters were also arrested and released. CJ Fitisemanu of Assist the Resist and Humanity First, and John Parker of Workers of the World. They were peacefully sitting in front of the Temple street entrance demanding the release of the children and families from indefinite detention. They were charged with misdemeanors for refusal to disperse, one count each and held overnight. Fitisemanu was released at 10 am and Parker was released at 830 am Wednesday morning.

The other protester arrested was a female activist, Samantha. She was also charged with a misdemeanor and was released that night.

The Temple entrance of the detention center was blocked for hours while approximately 30 officers surrounded the protestors who chanted to express solidarity with the two sitting demonstrators, Fitisemanu and Parker. 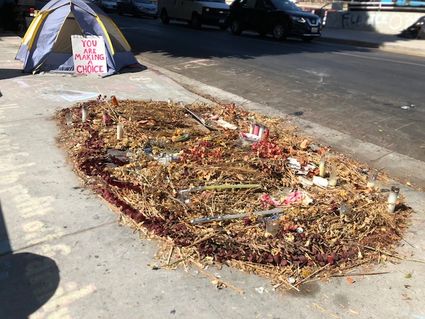 According to organizer Jeremy white of California for Progress, Agent Lynd purposely ran over the Occupy ICE L.A. altar by the third entrance driveway of detention center, crushing the candles.

During the protest, DHS Special Agent Chapman said, "You are able to exercise your constitutional right; however, you need to continue to move and not block the ingress and egress of the facility. That's what makes it unlawful."

One of the protesters, activist and organizer, Michelle Manus of California for Progress said, "We will stay here till the families and the children are released," and, "We will not be silent."

The Temple street entrance of the facility was blocked for hours during the protest which ended Tuesday night.

Approximately 60 protesters attended the event according to organizer Lauren Hammel of Humanity First.