Everytable, made its grand opening last Wednesday at the Compton Towne Center 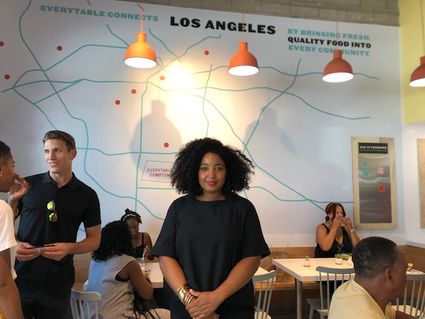 Sounds of high-volume music punctuated the festive atmosphere as the eatery, Everytable, made its grand opening last Wednesday at the Compton Towne Center.

Compton marks Everytable's sixth location. There are five others including the first, which opened in South L.A. in 2016. The others are in Santa Monica, Century City, and Baldwin Hills, Downtown L.A. and Watts.

Latifa Ward, a resident of Compton, between bites of her Jamaican Jerk Chicken meal ,. said, "We can go to fast food like Taco Bell and McDonalds and spend 5 dollars or spend 5 dollars here for healthier food."

Ward added that she's also a fan of the other fast food chains too. "I'm not saying I don't like Taco Bell or McDonalds. We could do both," she said.

The chicken meal that Ward ate had smoked chicken, coconut, rice, beans, carrots and plantains, with spicy barbeque sauce and was just 5 dollars.

About 500 people attended Everytable's opening within the first two hours. Customers lined up out the door to cash in their free coupon for their grab and go meal. Some of the popular choices were the Salmon Super Food meal, the kale salad, and the Jamaican Jerk Chicken.

According to Polk, Everytable seeks to redefine the food landscape the way McDonald's did fifty years ago. The food is made fresh daily from scratch.

Polk's idea was to create a model for a healthy food company in "food deserts," such as South L.A. where people could pay less money for the same meal than in more affluent neighborhoods.

Compton has been identified as one of the food deserts in Los Angeles. According to USDA, food deserts are identified as place where at least one fifth of the residents live in poverty and there is limited access to healthful food. A little more than one fourth of the people in Compton live below the poverty line. (https://datausa.io/profile/geo/compton-ca/)

Everytable uses a variable pricing model. For example, you can pay 5 dollars for a kale salad in Compton and pay 8 dollars for the same salad in Santa Monica.

Another unique feature of Everytable is that it has a feature called Pay It Forward. The way this works is that you can pay for a meal and get a note instead of the meal. You put the note on the wall and when somebody comes in who is hungry and has no money, he or she can take the note and use it to get a free meal.

Although Everytable is a for- profit business, it grew out of the non-profit, Groceryships, that Polk created to address food-related health problems in South L.A. where life expectancy is lower than more well-to-do areas.

Polk, over a healthy salad bowl, talked about how he can keep the prices low by using one central kitchen in South Los Angeles for all six locations. He also said, "We have a business model that helps us make healthy food for everybody."

One of the customers, Adrienne Diggs, a Compton resident and social worker, said, "We have to feed our bodies nutritious food because in the community there's a lot of high blood pressure, and diabetes, and it's all related to what we eat. So, we continue to educate everyone about a healthy way of living so we'll be able to live longer."

From the Mayor Aja Brown's office, Melissa Freeny, who is the Chief of Staff, responded to a question about how the city is dealing with food deserts or scarcity of healthful food. She said, "over the past couple of years Mayor Brown and the city council have been successful in attracting new grocery options here in the city of Compton. We welcomed about three new grocery stores."

Freeny also added, "Everytable opening here in downtown is really really big for our city," and although she acknowledged there are a lot of eateries in the shopping center such as Yoghurt Land, but that Everytable "is the first of its kind that has provided heathy options. 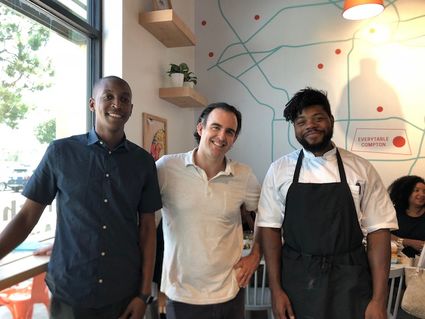 Everytable will be opening more stores in Los Angeles in the near future.