In an otherwise ordinary life, Stan Lee painted a world in which we could all think of ourselves as superheroes in some fashion 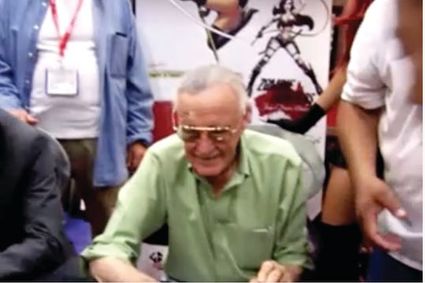 In life there are moments that are so incredible that they are indelibly painted on the forefront of our minds. On the passing of the Iconic Stan Lee I recall the few times I was privileged to see and listen to his wealth of knowledge. However, the one moment that will remain forever cherished is the moment I met the great Stan Lee.

It was an accident of chance. Our second time at Comic-Con in San Diego, while my son played a game at a vendor, I stood by perusing the books at the nearby booth. A young man asked me if I was waiting in line for an autograph. When asked who for he responded with Stan Lee and offered to sell me the new comic collaboration with Anthony Winn, dumbfounded I of course purchased the comic and got in line.

It wasn't long before the line was capped and Mr. Lee arrived. He was quick with the signatures, each time smiling and greeting everyone as if they were a personal friend. My turn arrived fast, he looked me in the eyes, and in his friendly demeanor as I thanked him, he thanked me in return. I got the impression that he was a kind man who thought it was amusing that people wanted his autograph. He didn't take himself that seriously and was having a great time.

Stan Lee was a staple at SDCC and was always entertaining to listen to. Our first year attending the convention he was speaking at the Marvel booth, and all who were in attendance, and within hearing range, got to listen in to his marvelous stories and words of encouragement. The crowd was bursting at the barriers with attendees stopping enroot to take a listen.

At the first LA kamikaze convention Stan Lee was walking the floor on route to a meeting room, with a large following of fans. It reminded me of the pied piper of Comic book fans, as people lined up and followed behind him. He was never annoyed with his fans and was always a gentleman.

Stan Lee added the flavor to an otherwise ordinary life. He painted a world in which we could all think of ourselves as superheroes in some fashion. He took the ordinary and made it extraordinary for all of us everyday people. He understood that we are all regular people who just want to feel special sometimes. I am heartbroken to know that Stan has joined the ranks of all the greats that have gone before him. Stan we are all grateful for what you have left behind as you traveled through this world.