As Hanukkah begins, Debate Over Oldest Depiction of Menorah Intensifies 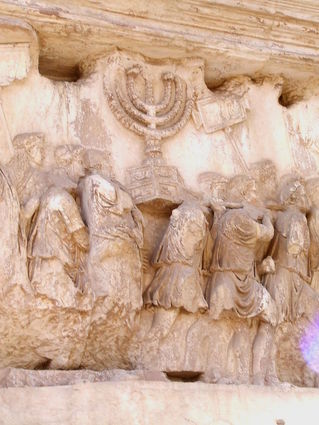 Jewish slaves carry off the Menorah to Rome after Jewish revolt crushed in 70 AD. Detail from the Arch of Titus

What is Hannukah? Imagine if your cellphone was at 10%, but lasted for 8 days. Now you understand Hannukah, says a new T Shirt that explains the Jewish holiday. Yes, but how did the Menorah get nine branches, when Deuteronomy specifies just 7 branches?

Early Menorahs apparently had just 7 branches. Today they have nine. No one is certain precisely when and how this evolution took place.

Take for example, the Arch of Titus, which has a 7 branch Menorah looted from the Ancient Temple in Jerusalem. The Arch of Titus is a 1st-century AD honorific arch, located on the Via Sacra, Rome, just to the south-east of the Roman Forum. It was constructed in c. AD 82 by the Emperor Domitian shortly after the death of his older brother Titus to commemorate Titus's victories, including the Siege of Jerusalem (AD 70).

The arch has provided the general model for many triumphal arches erected since the 16th century-perhaps most famously it is the inspiration for the Arc de Triomphe in Paris, France.

The Arch provides one of the few contemporary depictions of Temple period artifacts. It became a symbol of the Jewish diaspora, and the menorah depicted on the Arch served as the model for the menorah used on the emblem of the state of Israel.

Holiday Event to Explore Origins of Hanukkah and Christmas

The Guibord Center will present Holy Days of Light: Roots of Hanukkah and Christmas on Saturday, December 8 in Santa Monica. The family-friendly holiday event, which is free and open to the public, will also be live streamed.

In Judaism, hope is embodied in the miracle of light celebrated in the festival of Hanukkah, and in Christianity, hope comes through the birth of Christ, the Light of the world. Rabbi Neil Comess-Daniels, Temple Beth Shir Shalom, and the Rev. Canon Mark Kowalewski, Dean of St. John’s Episcopal Cathedral, will explore the origins of these beloved holidays and how light became the symbol of hope associated with both.

Who: The Rev. Dr. Gwynne Guibord, Founder and President, The Guibord Center

What: Holy Days of Light: Roots of Hanukkah and Christmas 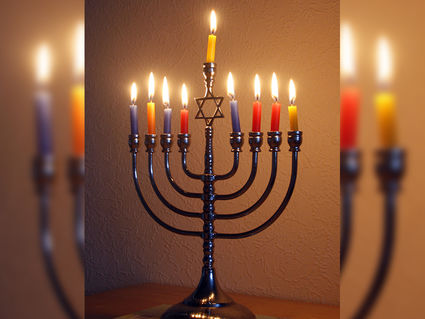 Early Menorahs apparently had just 7 branches. Today they have nine. No one is certain precisely when and how this evolution took place

If bringing children, please RSVP by Dec. 1 with the number and their ages