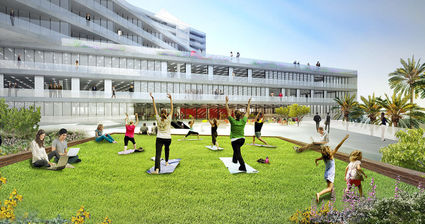 Yoga in front of the plaza. Something tells me it won't really look like this.

A draft environmental impact report has been released for a controversial mixed-use project proposed for the corner of 4th Street and Arizona Avenue in downtown Santa Monica. The project is somewhat scaled back from its original conception where it would have risen to 148 feet in height. This version reaches 129 feet (12 stories) at its highest, which would be along a new east-west alley in the middle of the block.

Many residents oppose the project, located on city-owned property, no matter what height it reaches. They argue that given a frantic rate of development in the city, together with attendant traffic and parking issues, the site should become a public park. The draft EIR, as required by the California Environmental Quality Act, will address and analyze a "reasonable range of alternatives" to the project, which should include this public park.

Meanwhile, the Plaza at Santa Monica Project, as currently imagined, will include 100,000 sf of office space, 42,000 sf of retail space, and 280 hotel rooms.

In typical Santa Monica feel-good fashion, the developers have been given the choice of either providing 48 "affordable" housing units on site - or funding the construction of 130 such units elsewhere (where the lowdown affordable residents won't be able to bother the high-rent-paying customers). Supposedly, these allegedly affordable units will be built in the downtown Santa Monica area. The city does not have a good track record of holding developers to their agreements to provide affordable housing. However, the whole notion of affordable housing in a city where the cost of living is through the roof and others are paying top dollar to live near the beach is rather strange anyway, so the fact the city doesn't bother making it happen is just another twist in the whole, perverted mess.

In order to build the project, an existing bank building and surface-level parking lots (including the one used for the winter ice-skating rink) will be razed. 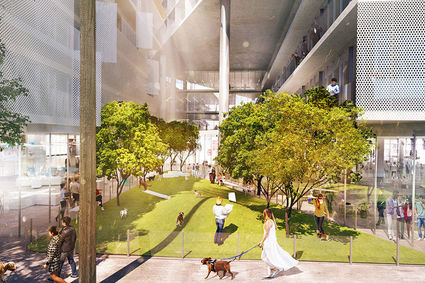 Plaza Dog Park. If you think it will really look like this, I own a bridge you may want to buy in the Pico Neighborhood

To compensate the residents for the increased traffic, parking demand, and theft of air space, the Plaza will give us a Grand Public Plaza (whatever that is), another plaza at the corner of 5th Street and Arizona, two pocket parks (whatever those are), a 11,000-sf second level public park, a 12,000-sf cultural amenity (we probably don't want to know what that is), and a 1,700-sf bike center.

The project is being developed by Metropolitan Pacific Capital and Clarett West Development. Rem Koolhaas's firm, OMA, VTBS Architects is designing the building and Olin landscape architects is working on the exterior.

The project will involve the removal of the northern half of 4th Court, that runs between Arizona Avenue and Santa Monica Boulevard. Instead a new east-west alley will run midblock along the southern boundary of the site to connect the remainder of 4th Court to 4th and 5th Streets.

Affordable housing. We all know what that means. Santa Monica just had a ribbon cutting ceremony on a new 64-unit building where ALL units were affordable. Add to that the mandatory 15% of affordable unit that must be included in all new residential or mixed use construction. WHY is Santa Monica inviting crime and poverty to town? First it was the Metro train creating a bee-line between Skid Row and Santa Monica, making it so much easier for undesirables to get to the beach. Now, it's affordable housing and over-development everywhere. The city is unrecognizable from what it was just ten years ago. I shudder to think of what it will be ten years from now. By the time Santa Monica becomes a crime-ridden hellhole, the people who sold the city's sole for tax revenue will be living in Beverly Hills. It won't be their problem anymore.