Santa Monica residents would really rather order from Amazon, as Tourists crowd the Promenade

Thirty years ago, the brick-paved carless three blocks of stores and restaurants now known as the Third Street Promenade was a makeover itself. For decades before that, there had already been a pedestrian 'street' dotted with fountains and lined with shopping. By sprucing up the storefronts, adding the brick paving and some other features, the outdoor mall was rebranded as something new and different. People flocked to enjoy the new look and shop at stores they could find in their own neighborhood: the Gap, Old Navy, Skechers and all of the other national brands. Santa Monica became the envy of surrounding Los Angeles area shopping centers, who quickly copied the look, such as The Grove in the Miracle Mile district.

Santa Monica retailers have not been immune to the depletion of business caused by Amazon and other online retailers. In addition, the increase in 'homeless' individuals in the area, who have always been an irritating presence on the Promenade, make outdoor shopping in Santa Monica less pleasant than heretofore. Changes in California law have basically decriminalized certain types of theft, which can make both buying and selling retail in a brick-and-mortar store more risky.

This summer, DTSM inaugurated "The Experiment" to try to entice people to use the Promenade and, in the process, tell the organization what will keep them there.

"It's a placemaking project," says Steven Welliver, DTSM Deputy Chief Executive. With movable street furniture, patches of Astroturf, and books to read from the Friends of the Santa Monica Library, the 1200 block of the Promenade is attempting to become, "a place not just to shop and dine, but to hang out and enjoy the ocean breezes and abundant sunshine." Welliver hopes the Promenade can became "a cool, welcoming place to connect with others."

Visitors will be encouraged to provide feedback using either an online survey tool or by weighing in at "Happy or Not" kiosks.

The DTSM hopes to use The Experiment as a key component of the "Promenade 3.0" project, which seeks to refresh the outdoor mall. Already completed is the repair and upgrade of the popular dinosaur topiary sculpture fountains, which have been given new tile work and LED lighting. 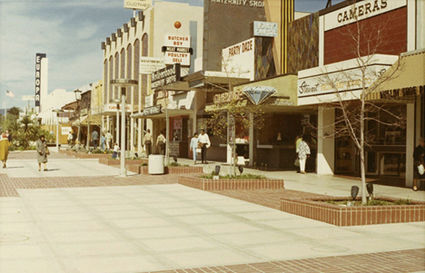 Architect Josh Shedd also believes superficial design changes can make people want to use the Promenade more. He has redesigned three storefronts in the 1300 block and is convinced that a sleek, defined look attracts millenial customers, claiming that two of the stores, which had been empty before his redesign, are now fighting off potential tenants. "To bring the Promenade's buildings back to life, it just requires creativity and support from the landlords."

When drug addicts are hanging out in front of the store, however, it is unlikely any sort of friendly street furniture, lit-up dinosaurs, or sleek and refined storefront designs are going to convince a potential customer that it wouldn't be easier, more pleasant, and safer, to shop with their mouse back home.

The original concept of the third street promenade was fantastic and we loved going there to watch fils, eat after and stroll the record and book stores. Look back to those original plans and let artists and craftsmen do pop up shows in the abandoned storefronts. Small theater companies, stand up comedy and a diverse music scene. Interactive art installations such as Meow wolf here in Santa Fe. Give residents a reason to come back to the promenade. We loved it so in the early ‘90s then greed destroyed it for the residents. I’m sure the landlords would prefer some rent over no rent and can give back to the community after collecting outrageous rents for over 20 years.

I've said for years that the Promenade needed to be a show-piece, the jewel at the center of the city, but because of a lack of vision (Astroturf?), non-business friendly regulations, taxes, and the homeless, that never happened. Now, with so much more affordable housing (Section 8) being mandated for new construction and the train bringing in people from inland who commit crimes, it's only gotten worse. I was on the Promenade a while back and could not believe the difference in the caliber of people I saw, and I'm not talking about the homeless. It was markedly different from just a few years ago. It won't do any good if a revamped Promenade is still unsafe to shop at. The city's problems largely stem from over-regulation and over-development. As for the Promenade, LESS regulation and BIG financial or tax incentives for vendors is a start. Get rid of the lame karoke artists and drummers banging on plastic buckets. Class it up and call the design team of The Grove.

Of course the locals buy vie Amazin or drive to Westfield on Saluson! We can't afford to Shop on the Promenade . Or eat there. Would someone please tell the organizers that Adirondack chairs are extremely uncomfortable . Too many homeless - you can't put lipstick on a pig. Too bad Barnes and Nobel left.That beautiful building is empty and forlorn, casting a grey empty shadow at what was once a cozy inviting space . So distressing.