Video: Watch as a Tsunami wipes out a Concert Stage on an Indonesian Beach

As local pop band concludes a set, a wave lifts them into the audience, killing most of the bank and 222 others

As local pop band concludes a set, a wave lifts them into the audience, killing most of the bank and 222 others

As a local pop band concludes a set, a wave lifts them into the audience, killing most of the band members and 222 others. While the Tsunami was only 4 feet high at the beach, it was enough to drag the band, its equipment and audience inland several hundred yards.

The Tsunami occurred on Saturday night, and is believed to have been caused when a landslide, either underwater or above water, from the steep slopes of Mount Krakatau, slipped into the seas in the Sunda Straight near Borneo.

It was the fourth Tsunami causing loss of life in the Island nation of 260 million people. 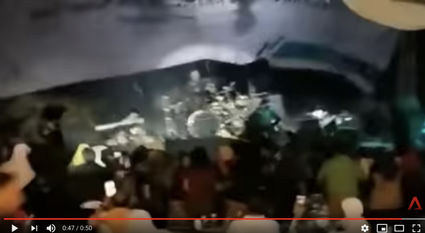 As local pop band finishes set, waves crash into the band and drag them into the audience

The tsunami's waves struck beaches along the Sunda Strait without warning at about 9.30pm local time on Saturday, collapsing homes and hotels, crushing vehicles and ships, toppling electricity poles and sweeping victims out to sea.

Tragically it hit several popular tourist destinations during the peak holiday season. No tsunami alarms sounded, and people did not feel an earthquake so the waves struck without warning.

Indonesian Police warned people to avoid the beaches due to the possibility of aftershocks and another tsunami.

Officials say the tsunami, which occurred between the islands of Java and Sumatra, in the strait between the Indian Ocean and Java Sea, may have been caused by an undersea landslides after the Anak Krakatau volcano erupted 24 minutes earlier.