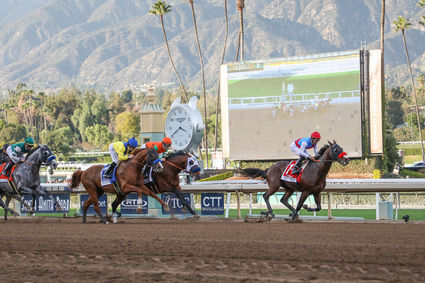 a glorious day at Santa Anita.

Santa Anita Park's 2018-19 Winter Meeting got off to a record-breaking start on Wednesday, as the track posted an all-sources pari-mutuel handle of $20,491,016, a 19 percent increase over a year ago and an all-time opening day record. Wednesday's opening day crowd of 41,373 contributed to an on-track handle of $3,463,535, a five percent increase over last year's $3.3 million.  On-track attendance was up year to year three percent. In measuring the significance of Wednesday's numbers, the last time Santa Anita opened on a Wednesday was 2012, when all-sources handle was $13.4 million, making yesterday's handle of $20.4 million a whopping 52 percent increase.  On track attendance on Wednesday, Dec. 26, 2012 was 27,273, making yesterday's 41,373 a 52 percent increase.

"Yesterday's attendance and handle numbers are the result of many factors, none greater than field size," said Tim Ritvo, COO for The Stronach Group (TSG).  "We would first of all like to thank our tremendous fans, not only here at Santa Anita, but around the country as well.  They recognize a top quality product that offers good value and they responded in-kind yesterday. "We had tremendous racing and the horsemen obviously responded to the great opportunities our 10-race program offered.  We had world class racing and it was great to see so many top riders from the East Coast in here to ride.  Operationally, we are very happy with how things went and we'll look at everything and apply those lessons-learned to our other big days throughout the New Year, including the two-day Breeders' Cup in November.  Ritvo also noted the pivotal role Mathis Brothers Furniture continues to play in Santa Anita's opening day success, "They have been a tremendous partner," he said.  "We want to thank the Mathis family for their passion and participation here over the past four years.  The Mathis Brothers Plush Thoroughbred Toys were held tight by more than 4,000 little kids and were seen on television locally and nationwide.  Additionally, the Mathis Brothers Mile (Grade II, $200,000) attracted 10 horses and it was a huge part of our pari-mutuel success yesterday." As for opening day performances, Bob Baffert's McKinzie was the star of the afternoon, winning the Grade I, $300,000 Malibu Stakes by a measured 4 ¾ lengths under Mike Smith while covering seven furlongs in 1:22.48.  Owned by Mike Pegram, Karl Watson and Paul Weitman, McKinzie was off as the   6-5 favorite in a field of 14 and he paid $4.40 to win. 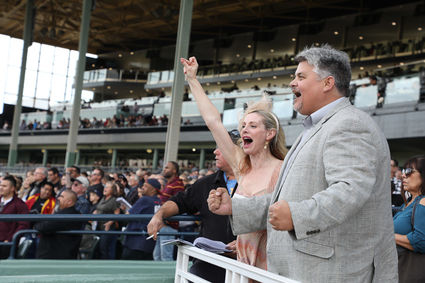 Record crowds of over 40,000 in attendance

In the Grade I, $300,000 La Brea Stakes, it was trainer Brian Koriner's California-bred Spiced Perfection, winning by 1 ¼ lengths in a field of eight 3-year-old fillies under Flavien Prat.  Owned by Michael Faber's Dare to Dream Stable, LLC, Spiced Perfection was off at 5-1and she paid $12.80 to win while getting seven furlongs in 1:23.54.

In his Southern California debut, Hronis Racing's Gift Box was an impressive half length winner of the Grade II, $300,000 San Antonio Stakes under newly relocated Joel Rosario.  In his first start for John Sadler, Gift Box was off at 6-1 in a field of nine 3-year-olds and up and paid $15.00 to win while covering 1 1/16 miles in 1:43.88. In the Grade II, $200,000 Mathis Brothers Mile (turf), Irish-bred River Boyne provided a formful result.  Off as the 2-5 favorite in a field of 10 sophomores, he paid $2.80 to win with Flavien Prat up.  Trained by Jeff Mullins and owned by Red Baron's Barn, LLC and Rancho Temescal, LLC, he got the distance in 1:34.52.