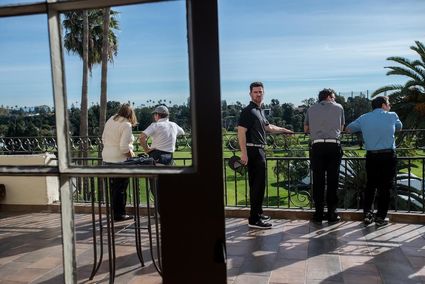 Bubba Watson was preparing for his post-golf life around at this time last year when his win in the Genesis Open at Riviera Country Club reassured him that his talent was still there. This year's tournament starts on Valentine's Day and offers the chance for another pro to rediscover his love for the game. Tiger Woods, last year's big draw, is back again after his own redemption with his first win since 2013 at September's Tour Championship. Who will be the next to break through?

Dustin Johnson is also back, after being unseated as defending champion by Watson's win, and by his standards he had an underwhelming season last year. Currently ranked #3 in the Word, Dustin briefly regained the top spot last summer with three wins, but underperformed in the majors when he flamed out in the third round at the US Open and missed the cut at the British.

Other veterans in the field include two-time Open champion Padraig Harrington, US Open winner and Ryder Cup Captain Jim Furyk, Jordan Speith, who needs only a PGA Championship for the career Grand Slam, and Justin Thomas, who hold a PGA Championship as his first and only major win. Other major figures already committed to the tournament include world #5 Bryson DeChambeau, #10 Tony Finau, Matt Kuchar, Ireland's Rory McIlroy, Spain's Jon Rahm, and England's Paul Casey.

Phil Mickelson will miss this year's event, having noted on his social media accounts that he was no longer going to play courses with challenging rough. At 48 years of age and suffering from psoriatic arthritis, he feels that it is a waste of his time to try. However, local favorite and senior tour golfer Fred Couples is in the field on a sponsor's exemption.

A good dark horse for a return to the spotlight could be 2017 Masters winner Sergio Garcia, who had a quiet last year outside of being on the winning European team in the Ryder Cup. He had one win on the European tour in the Andalucía Valderrama Masters, but his biggest mark in the US was the 13 he scored on the par-5 15th hole at the Masters.

Fans hoping to see similar chaos will have plenty of opportunity at venerable Riviera Country Club, which has hosted Los Angeles' PGA tour stop 55 times since 1973. The course has no water hazards, but has plenty of sand traps and barrancas awaiting the players. The fairways are all kikuyu grass, a drought-tolerant East African species that provides great lies in the fairway but snarls into dense wiry when it is left to grow in the rough.

Last year's most difficult hole was the 12th, a 479-yard par 4 that usually plays into the wind and requires golfers to hit a small green enclosed by a barranca, bunkers, and trees. Bogey's Tree is on that hole, a sycamore under which Humphrey Bogart used to sit with a thermos of bourbon and watch the pros. In the final round last year the hole gave up only five birdies while exacting 25 bogeys and four doubles from those golfers playing well enough to make the cut and bring home prize money.

A favorite of spectators is the 10th hole, a very short par-4 where the average professional can reach the green with a tee shot. Doing so usually means a very good chance at an eagle, if the ball stays on the green. They rarely do, and the small green is surrounded by trees and high bunkers. Missing the small green with your tee shot leaves a difficult and often obstructed chip show. For that reason, many golfers choose to lay up short with an iron and not challenge the hole, often to the vocal displeasure of the spectators. There is no good answer to the 10th hole.

Other holes offer similar quirks and challenges. The 18th calls for a long blind tee shot up a hill that might be better termed a cliff, with the fairway landing area canted to the right to dump golfers into the eucalyptus trees in the rough. The 6th hole is a par-3 with a sand trap erupting in the center of the green, and the 8th has a split fairway, offering two different approaches to the green.

Fans wanting to see long drives should skip the 1st hole. Although the hole has a majestic elevated tee box, it is crossed by a barranca that keeps players from going all-out on their drives. Both the uphill par-5 17th and the straight and narrow 11th require longer shots to hope to get on in two. There are no boring holes at Riviera, and spectators can find numerous spots where they can see play on multiple holes at once.

Genesis Motor America, headquartered in Fountain Valley, returns as the title sponsor. The company, in cooperation with Tiger Woods' event management company TGR Live, has worked to improve the tournament experience for fans over the three years they have hosted it. The free-admission Genesis Lounge off the 14th hole returns, offering television monitors and seating for an elevated view of the par-3's green.

Upgraded concessions are offered at The Boulevard by the 2nd green, and the Slab BBQ brings Texas barbecue in a beer garden setting between the third and 18th fairways. A pop-up bar nearby will offer premium seating for the show, but will require a separate $80 ticket.

Tickets to the event start at $17 and are free for children under 16 when accompanied by a paying adult. Active, retired, and reserve military members get free admission, and get a 50% discount on advance ticket purchases for their guests. A limited number of $75 passes for upgraded parking at Will Rogers State Historic Park are available online.

Otherwise, parking is available at structures S1- S8 in downtown Santa Monica and at the Civic Center, with free shuttle service picking up at 1447 2nd Street and 333 Civic Center Drive. Genesis Open Parking Ambassadors will be on hand to assist with any questions. The shuttle buses will run continuously from 6:00 a.m. to 7:00 p.m. during the week and from 7:30 a.m. to 5:00 p.m. during the weekend rounds. There is a dedicated rideshare pick-up/drop-off area for Uber and other services at Paul Revere Charter Middle School. Patrons may bring their cell phones into the event this year, but must have them on silent mode.

Watson's win here last year helped lift him to two other wins, but it is hard to say that any shot he hit last year was as memorable as the one he attempted over NBA All-Star Tracy McGrady at the NBA All-Star Celebrity game at Staples Center. Watson opted to play in the game after the second round of last year's tournament and unfortunately chose to challenge McGrady with a shot, which was driven high, long, and far back over Watson's shoulder. Unsurprisingly, afterwards Watson decided to stick with his day job, and, no worse for his experience, brought home the winner's prize of $1,296,000.