As first day is delayed due to rain, we see a repeat of 2017 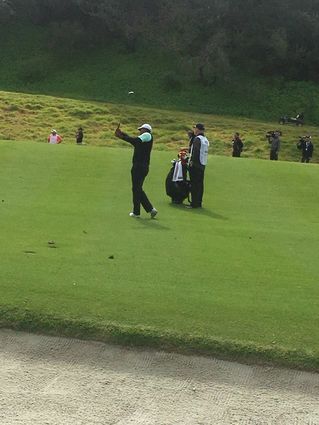 Uncertainty is the keyword for this year's Genesis Open at Riviera.  If the weather allows play, the brightest names in golf will hit the course in an event where nothing can be taken for granted.

Tiger Woods returns to Los Angeles to take on a course where he has had little success.  Despite being the most dominant figure in modern golf, Tiger has not been a major factor at Riviera this century.  Tiger's best finish was a tie for second in 1999, and, although he has placed in the top ten twice since then, he has been coming from far off the lead.  Last year's second round score of 4 over par was his worst at Riviera.

Nevertheless, the expectations at high for Tiger at the course where he made his Tour debut.  More pressure comes from the success of his frenemy, Phil Mickleson.  Almost written off on the eve of his 49th birthday, Phil has had a hot start to the new year.  After tying for second at Palm Springs and winning at Pebble Beach last week, he comes to Riviera after a last-minute change of plans.  There's no reason why Phil should contend at Riviera this year, but nothing about him makes sense.

During the futile attempt to start play on Thursday before the rain halted play, Phil attempted to drive the green on the treacherous and beguiling 10th hole.  He missed, landing in a wet sandtrap.  His next shot went across the green to plug in another trap, and that shot ran the green into another trap.  At that point, facing bogey or worse, Phil hit out of the sand and into the cup for par.  That's the Genesis Open this year.

None of that matters, because the Tour has chosen to restart the round from the beginning.  The weather the players will face is unknown: at press time, it looks like four consecutive days of intermittent rain.  The condition of the course is also a mystery.  Although Riviera drains well, we have had weeks of unusually constant rain pounding the area.  Some traps and tee areas look washed out, and there may be changes to the layout because of the conditions.

Beyond Tiger and Phil, the players taking on the course have had puzzling recent results.  Mainstays of the tour like Jordan Speith, Dustin Johnson, and Rory McIlroy have not been playing to their usual standards.  The new mainstays of the tour like Justin Thomas, Bryson deChambeau, and Matt Kuchar come to Riveria hoping to continue their good play, but cannot be confident here.

Perhaps, like returning champion Bubba Watson, a player will resuscitate their career this year at Riviera.  Veterans like Adam Scott, Sergio Garcia, Aaron Baddeley, and Charles Howell III can hope to reestablish themselves on the Tour with a win here.

Old timers hoping to catch lightning in a bottle like Mickleson has include Ernie Els, Jim Furyk, K.J. Choi, and local favorite Freddie Couples.  Given what has happened so far this season, nobody can be counted out.  If it ever gets played, this year's Genesis Open will be wide open and should be very memorable.