Chevy Cruze production facility is planned to close on March 8th, but Unions and Politicians Hope for a last minute reprieve

General Motors announced last July that it intended to close 4 plants in North America, including the Lordstown Ohio facility employing, at one time, 14,500 UAW workers. Only about one third that number work there now, with the plant cut to just one shift.

American drivers have turned away from sedans like the Cruze, preferring SUVs, trucks and cross overs. The number of cars sold in America fell from 12 million to just 4 million units, while simultaneously the number of SUVs and trucks sold in America has increased from 4 million to 12 million. This according to CNBC.com. Note that these are overall numbers--not just for GM

The number of Chevy Cruze's sold meanwhile, fell from a peak of 254,312 units in 2014 to about 150,000 last year. GM's CEO Mary Berra is trying to "get ahead of the curve," the analysts say. She is looking at a market in 5 years with autonomous vehicles and shared vehicles.

Berra is one of America's few female CEOs. Local politicians and autoworkers have tried to appeal to her, asking her to rescue the families who will have no income once Lordstown goes "Unallocated" on March 8th. Unallocated is how GM says there will be nothing built in Lordstown.

Will Lordstown and the Chevy Cruze get a last minute reprieve? It's more likely than you might think.

First of all there's politics. Lordstown, which is expected to be idled in early June, has drawn support from President Donald Trump, who has campaigned on saving industrial jobs in Ohio, a key state in his 2020 re-election bid.

Then there's negotiations. Workers at Lordstown and the other plants are hoping the union will be able to negotiate to keep their factories open after the contract talks formally open this summer.

Finally, there is litigation. The United Auto Workers has sued General Motors to stop the company from closing three plants in Ohio, Michigan and Maryland. According to the suit filed Tuesday, the union claims its current contract forbids the company from idling the plants.

GM announced plans in November to end production at U.S. plants in Lordstown, Ohio; White Marsh, Maryland; Warren, Michigan; and Hamtramck, Michigan. GM announced this week that production at the Hamtramck plant, which borders Detroit, would continue until January, after the UAW contract expires. The plant was not included in the lawsuit. 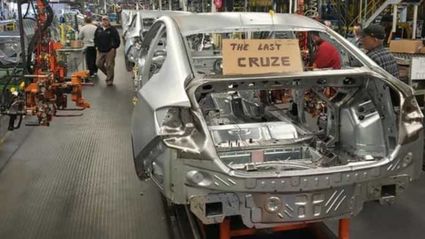 The last Chevy Cruze to be built in the US rolls off the Lordstown, Ohio assembly line on March 1, 2019.

The UAW's lawsuit includes a September 2015 letter from GM Vice President Catherine Clegg that says her correspondence "confirms" the company won't close, idle, sell off or consolidate plants during the union contract, which expires in September.

GM said in a statement Tuesday that the company's announcement last year about the closings doesn't violate the UAW contract.

"We continue to work with the UAW on solutions to our business challenges," the statement said.

Lordstown has around 1,400 hourly workers who help assemble the Cruze subcompact sedan. The Maryland plant manufactures electric motors and drive trains and employs 250 workers. The Warren plant has 265 workers who make transmissions.