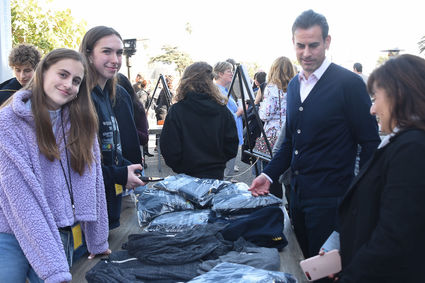 A total of 25 talented local teens lent their voices and instruments in support of the 5th Annual Chords2Cure: Curing Pediatric Cancer One Chord at a Time benefit concert which took place Sunday, March 10 at the The Eli and Edythe Broad Stage at Santa Monica College Performing Arts Center. This milestone event, by and for kids with pediatric cancer, featured local celebrity presenters Judd Apatow, Leslie Mann, Helen Hunt, Danny Trejo, Milo Manheim and his Mom Camryn and members of popular bands Snow Patrol, One Republic and American Authors performing with young musicians and vocalists.

To date, 2019 has been the most successful year yet with $160,000 raised thus far, bringing the grand total to more than $500,000 since the inaugural Chords2Cure in 2014. All donations go directly to helping fund important clinical trials by oncologist Dr. Noah Federman and the Pediatric Sarcoma Cancer Research he directs at the UCLA Jonsson Comprehensive Cancer Center. Dr. Federman treated the two local teens, Jaxon Blumenthal of Santa Monica and Mafalda von Alvensleben of Malibu, who were the inspiration for the inaugural Chords2Cure concert in 2014. Both teens are now in remission and appeared at Chords2Cure for the 5th consecutive year.

Filmmaker/Comedian Judd Apatow and his wife, actress Leslie Mann of Santa Monica opened the sold-out show at The Broad Stage, encouraging guests to be generous later on when Guest Speaker Tattoo Tom of StillBrave.org, who traveled from Washington, D.C., auctioned off a Taylor guitar signed by Katy Perry, which raised $1,400 for Chords2Cure. Actors Helen Hunt of Santa Monica, Danny Trejo, Milo Manheim and his Mom Camryn Manheim of Venice all made special appearances in support of the cause.

Highlights from the show include: C2C Co-Founder, high school junior Juliette Pegula of Santa Monica performing her original song Day by Day; Coco Arquette of Malibu, Ana Kahan of Brentwood and C2C Co-Chair/Musical Director Meredith Pegula of Santa Monica joining Gary Lightbody, the lead singer of Snow Patrol, all the way from Ireland, to perform the band's hit song Chasing Cars, which @courtneycoxofficial shared on Instagram; and Drew Brown, guitarist of OneRepublic, from the Pacific Palisades, performing Sir Duke by the great Stevie Wonder with teens Jaxon Blumenthal and Joby Levit of Brentwood on vocals backed by an all student band. One of the most touching, get-up-and-dance moments of the show took place after intermission when Zac Barnett, the lead singer of American Authors from Sherman Oaks, sang the band's hit song Best Day Of My Life with two teens in remission from pediatric cancer: Jaxon Blumenthal and Brooke Besikof (of Newport Beach). Jaxon's Mom Chrissy Blumenthal, Chords2Cure Co-Chair and Talent Coordinator of Santa Monica, shared the story of hearing the song on the way to the hospital when Jaxon was being released following a liver transplant and crying because it really felt like the best day of her life to finally be bringing Jaxon home with a second chance at life. Coco Arquette returned to the stage for a rousing duet of Ain't No Mountain High Enough with Eden Ellenberg of Marina Del Rey. Zachary Zwelling of Brentwood who appeared on Broadway in School of Rock closed the show with a blistering guitar solo of Queen's stadium anthem, We Will Rock You joined by the entire Chords2Cure cast on vocals.

It's not too late to donate for anyone who wants to help support the groundbreaking work Dr. Federman is doing to develop desperately needed, new, less toxic treatments for kids with cancer. Visit Chords2Cure.org or the teen fundraising pages at https://jccf.everydayhero.com/us/team-chords2cure/members to donate on behalf of your performer of choice and help them do their part in the fundraising to cure pediatric cancer one chord at a time. All proceeds go to UCLA Jonsson Comprehensive Cancer Center to help fund pediatric cancer clinical trials which is crucial in light of the fact that:

98% of existing treatments for pediatric cancer are more than 30 years old. 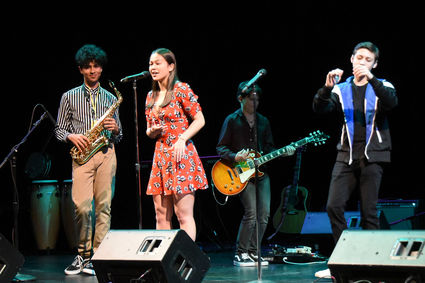 Pictured left to right are: Miles Hoegl on sax, Joby Levit on vocals, Zach Zwelling from School of Rock on Broadway on guitar, and Jaxon Blumenthal - in remission from pediatric cancer and one of two teens who inspired the inaugural Chords2Cure 5 years ago - also on vocals.

Every day 43 kids are diagnosed with cancer. 1 in 8 will not survive.

60% of children who survive cancer suffer long-term side effects.

In addition to the live auction of Katy Perry's autographed guitar by Tattoo Tom, Chords2Cure mystery box auction items raised additional funds and included $1,500 in Lyft credits. Santa Monica's Crossroads School of Arts & Science 8th grade Latin teacher Marisa Alimento came out to support her students who performed in the show and was happy to win the Lyft credits -- she's looking forward to not driving for a while! Guests enjoyed pre-show and intermission food and fun provided by Green Truck, Fat Burger, Pressed Juicery, Trejos Coffee & Donuts and Lattes on Location plus photo ops with adorable @norbertthedog from Instagram. Limited edition C2C 5th Anniversary sweatshirts are still available online from The Designer Hoodie Company, MadHappy, while supplies last at http://www.chords2cure.org/store/p12/Madhappy.html.