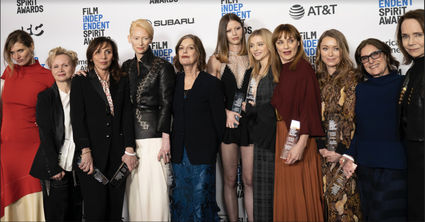 The ensemble cast of "Suspiria" after winning the Robert Altman Award and the award for Best Cinematography at the Independent Spirit Awards.

The films honored this year include: "If Beale Street Could Talk", "First Reformed", "The Wife", "Can You Ever Forgive Me?", "Suspiria", "Roma", "Sorry To Bother You", "You Were Never Really Here", "En El Séptimo Día", "Eighth Grade", and "Won't You Be My Neighbor?".

Ethan Hawke was awarded the Independent Spirit Award for Best Male Lead for his role in "First Reformed". The film is a mesmerizing follow-up to Writer/Director Paul Schrader's earlier works about truth and redemption. It chronicles the life of an empathetic pastor in upstate New York (Ethan Hawke) who has a destabilizing, existential crisis after counseling Michael (Philip Ettinger), a troubled environmental activist who was recently released from prison, and his pregnant wife (Amanda Seyfried).

Glenn Close won an Independent Spirit Award for Best Female Lead for her role in "The Wife". The film tells the story of Joan Castleman (Glenn Close) and her husband, acclaimed novelist Joe Castleman (Jonathan Pryce), whose lives are irreparably changed when they learn that Joe will be awarded the Nobel Prize for Literature.

The Independent Spirit's Robert Altman Award and its award for Best Cinematography went to "Suspiria", a remake of the 1977 cult film about an American dancer who joins a world-renowned dance company that is run by a group of women who are accused of witchcraft. Dakota Johnson, Tilda Swinton, Chloë Grace Moretz, and Mia Goth star in this stylized, psychological horror film.

Best Documentary went to "Won't You Be My Neighbor?", a film that provides an intimate portrait of Mr. Fred Rogers, the host and creator of the children's television show, "Mister Rogers' Neighborhood".

The John Cassavetes Award (for best feature made for under $500,000) went to "En El Séptimo Día" (On The Seventh Day), which follows a group of undocumented immigrants in Brooklyn over a seven-day period. 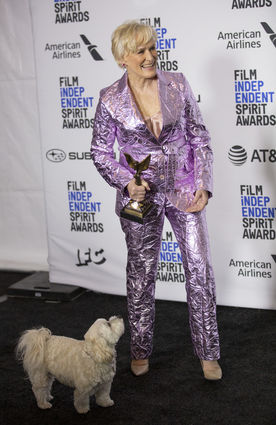 Actress Glenn Close and her dog, Pip, pose for photos after Close won Best Female Lead for her performance in "The Wife" at the Independent Spirit Awards.

The Independent Spirit Award for Best Editing went to Joe Bini for "You Were Never Really Here", Best First Screenplay went to Bo Burnham for "Eighth Grade", and Best First Feature went to Boots Riley for "Sorry To Bother You".

Hosting the Independent Spirit Awards for the first time was Actress Aubrey Plaza, who starred in the hit TV series, "Parks and Recreation", the Adam Sandler comedy, "Funny People", and the zombie comedy, "Life After Beth". She is also starring in the upcoming 2019 reboot of the classic horror film, "Child's Play".

Film Independent, the organization that sponsors the Independent Spirit Awards, uses the awards show as its primary fundraiser for their year-round programs, which include sponsoring five independent filmmaking intensive labs and a weekly movie series at the Los Angeles County Museum of Art.