End Climate Change and Have Imperfect Produce Delivered to your Door

Imperfect Produce is a bit twisted or has the wrong color, or are too big or small 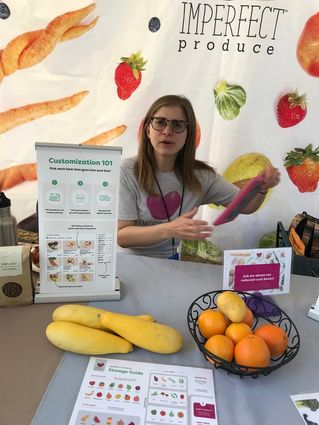 Alyssa is an "imperfect representative" for Imperfect Produce, at LA Nature Fest 2019

About 20% of produce is discarded at the farm because it is imperfect. A potato might grow lobsided, or the skin of a pear might be brown. Mother Nature doesn't insist on perfection, and a San Francisco based Imperfect Produce is betting you won't either.

And you get to customize your box! Every Tuesday, you login and decide whether you want Butternut squash and baby carrots, or no Brussels sprouts, no Cauliflower and just one bag of broccoli tops. Both organic and "conventional" options are offered. My favorite, sweet mini-peppers are there, as are onions and potatoes, avocados and strawberries, garlic, sugar snap peas, rhubarb and asparagus. There are also non produce items such as coffee and tea.

Why imperfect produce, you ask? Food is a terrible thing to waste. It's bad for people and the planet, and yet 40% of all the food produced in the US goes uneaten. From farms to fridges, waste is a massive problem that has infiltrated every level of our food system. It's a problem we can all play a role in solving," says http://www.imperfectproduce.com

"While waste occurs at every stage of the supply chain, Imperfect was founded to find a home for the

20 billion pounds of produce that currently go to waste on farms every year [2].

Imperfect works to address the 20 billion pounds of produce going to waste on farms each year, represented by the purple section on the left. Besides getting a box from us, you can help address food waste by supporting sustainable businesses, composting, and wasting less in your life."

The company posits that food waste also hurts the environment, and is aggravating climate change. "When we waste food, we end up wasting all of the resources that went into growing it. Growing food that goes to waste currently uses 21% of our freshwater, 19% of our fertilizer, and 18% of our cropland.

When food ends up in the landfill, it produces methane, a greenhouse gas 23 times as potent as CO2.

Reducing food waste is one of the top three ways to reverse global warming, according to research by Project Drawdown.

That's right, you can help save the world from climate change, simply by eating imperfect produce, yay! Ana Lee, former farmer and student in the Emmett Interdisciplinary Program in Environment and Resources at Stanford University wrote in the Washington Post in 2015:

Farmers recognize that they're at the whim of nature, and they plan accordingly, sowing extra seed with the assumption that pests, diseases or weather will take out some of the crop. That's part of life. But when plants survive all of that, only to be rejected because they happen to be too small, a little twisted or not quite evenly colored, the loss is harder to face.

My heart broke a little as I wheeled barrows of unmarketable onions that had grown long and skinny instead of short and round to the compost pile, or surveyed a field dotted with winter squash that we'd had to leave behind because the vegetables had been nibbled by bugs or were too small.

The nutrients in that produce would go back into the soil and nourish next year's crops, which was a noble purpose in its own right. But it was not the future we'd planned for our seedlings.

Sources relied upon by http://www.imperfectproduce.com

"Waste Land: Does the Large Amount of Food Discarded in the U.S. Take a Toll on the Environment?" Scientific American, http://www.scientificamerican.com/article/earth-talk-waste-land/. 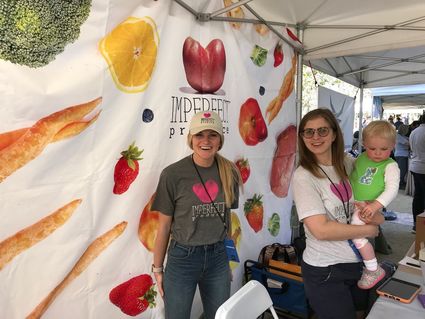 "Wasted: How America Is Losing Up To 40% Of Its Food From Farm to Fork to Landfill." Natural Resource Defense Council, Aug. 2017,www.nrdc.org/sites/default/files/wasted-2017-report.pdf.