City gave staff 1.4 million. They blew 130k of it on a new "advisor on homelessness." This article talks about all the "achievements" staff made with this money (a total of 23 people placed in housing). 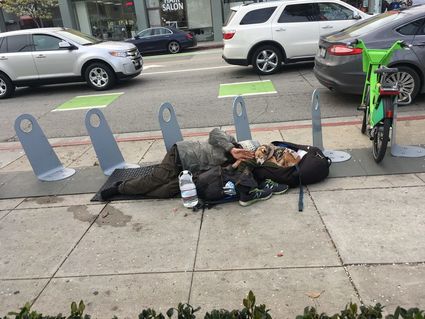 City gave staff 1.4 million. They blew $130,000 of it on a new "advisor on homelessness." This article talks about all the "achievements" staff made with this money (a total of 23 people placed in housing).

An Information Item sent from Santa Monica City Manager Rick Cole to the city council seeks to explain what achievements staff has made over the past year to address homelessness.

In late November of 2017, the council allocated $1.4 million from general funds for one-time seed money for staff to implement strategies to address homelessness. Staff intends to discuss what they’ve done with the money at the March 26 council meeting. Much of that information is contained in the Information Item report.

Bottom line: city staff have placed 16 individuals in interim housing and 4 in permanent housing. There were about 950 homeless people in Santa Monica at the beginning of 2018.

The number of individuals living on the street has surged throughout the region since 2017, around the same time Proposition 57 implemented the early release of “nonviolent” offenders from the state’s prisons. The Information Item notes that the profile of homelessness changed at that time to “one that was becoming more transient, unsheltered compared to sheltered, displaying greater mental health and substance use disorders.” In addition, more of the homeless were coming into Santa Monica from other locations, places where they had also “experienced long periods of homelessness.”

In other words, over the past two years at least, Santa Monica has been collecting individuals with problems from other cities.

The Information Item report bulges with bureaucratese such as “outcome areas,” “sub-outcomes,” “status updates,” and more. According the report, no goal has not been met, although some are admitted to still be “in progress.” This is relatively easy to achieve if goals are sufficiently vague and are more ideas rather than true goals. None of the goals include “Get people off the street.” Instead, the staff’s stated goals are things like “Prove efficacy of models to stabilize and connect homeless individuals to housing.” This goal is claimed as “met,” by the way, with a total of 41 people placed in permanent or interim housing since 2016.

Another “met” goal is to “Activate internal and external stakeholders to collectively address homelessness.” What staff did to achieve this goal was to create the online brochure on homelessness, deemed a “toolkit,” that many residents saw (and shook their heads over) last year. Staff also boasts that the We Are Santa Monica website received 6,500 clicks and the city’s social media channels garnered 66,734 impressions. In addition to these achievements - so closely related to removing mentally debilitated individuals from our public and private spaces - a whopping 240,000 issues of the city’s Seascape newspaper were distributed, each of which featured some content about homelessness.

We would be remiss if we did not mention that CCS produced 10 short videos “inviting the community to engage with our homeless neighbors and programs.”

Another big achievement of city staff was to hire a full-time Senior Advisor to the City Manager on Homelessness, Alisa Orduna. Her monthly salary is $10,937. Woops, there goes $131k of the seed money right there. 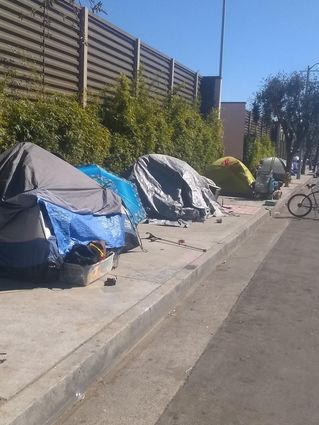 A homeless encampment in Venice

At least the city staff seem to realize they have some role of their own in creating the homelessness problem. They reduced the number of relocation orders they’ve been handing out due to housing code violations. From 244 such orders in 2017, they managed to get it down to only 162 last year. Kudos!

In the reports analysis, staff admits that placing all of 41 people in housing over a two-year span is a number that “may seem small.” But they argue that “this intervention is meeting its goal of public cost avoidance and housing the individuals with the greatest barriers.” Furthermore, we’re not to worry because they’ve hired RAND to conduct a study of the efficacy of the Homelessness Multidisciplinary Street Team (HMST). Apparently, studying a study will surely get more homeless people off the street and allow the city’s residents to once again be able to use their parks, public squares, and libraries.