Will the US and Iran be at War by the end of 2020? It looks increasingly likely 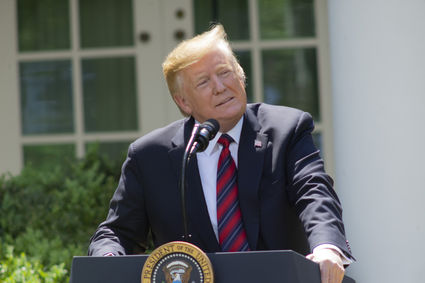 US President Donald Trump delivers remarks in the Rose Garden of the White House on immigration system.

Washington (dpa) – US President Donald Trump vowed Sunday to deny Tehran nuclear weapons just hours after threatening it would "be the official end of Iran" when the country's Revolutionary Guard said it was not afraid of war.

"I will not let Iran have nuclear weapons," Trump told Fox News.

"I don't want to fight. But you do have situations like Iran, you can't let them have nuclear weapons - you just can't let that happen," he said.

Prior to the interview Trump had appeared to escalate the growing threat of conflict when he used social media to respond to Iran's Revolutionary Guard saying it was not afraid of war.

"If Iran wants to fight, that will be the official end of Iran. Never threaten the United States again!" Trump wrote on Twitter, seemingly in response to comments Revolutionary Guard Corps commander Hossein Salami made earlier in the day.

Iran and its powerful paramilitary organization do not want war, but they also do not fear it, Salami said in comments carried by news agency ISNA.

US troops would be "easy to defeat," he said, because they - in contrast to Guard forces - are afraid of death.

Tensions have been escalating between the two countries since Tehran announced it would begin a partial withdrawal from the 2015 nuclear deal, from which Washington pulled out of last year.

"I ended the Iran Nuclear Deal, and actually, I must tell you - I had no idea it was going to be as strong as it was," Trump said Sunday.

"It totally - the country is devastated from the standpoint of the economy."

The United States declared the Revolutionary Guard a foreign terrorist organization last month - the first time the US has used the designation against a part of another government.

Last week, Iranian Supreme Leader Ayatollah Ali Khamenei stressed that Iran does not want war with the US, even as he rejected negotiations with Trump and said his country had chosen "the path of resistance."

Trump accuses Iran of continuing to seek nuclear weapons, destabilizing the Middle East and Gulf regions and promoting terrorism. He has pushed for negotiations with Iran.

Earlier in May, Iran announced it would begin partially withdrawing from the nuclear deal with world powers. The move came exactly one year after Trump decided to pull out from the agreement and reinstate tough economic sanctions on Tehran.