Los Angeles County Board of Supervisors banned official travel to Alabama for one year, in response to a new abortion ban 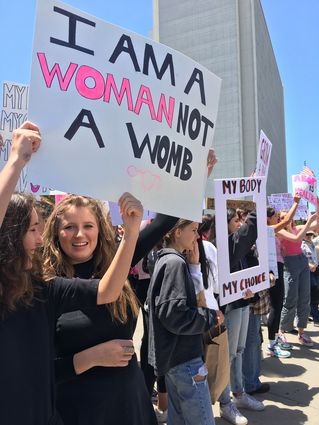 Thousands of abortion-rights activists rallied across the nation Tuesday in opposition to a recently approved ban on the procedure in Alabama and other legislative efforts seen as challenges to Roe vs. Wade, the landmark U.S. Supreme Court ruling that legalized abortion nationwide.

Organizers behind the #StopTheBan rallies included Planned Parenthood Fund, the American Civil Liberties Union and the Women's March. More than 400 rallies were planned throughout the country, most notably on the steps of the U.S. Supreme Court in Washington, D.C.

At least 20 rallies were planned throughout California in cities including San Diego, Los Angeles, San Luis Obispo and San Francisco.

In downtown Los Angeles, activists gathered in Pershing Square. And in West Hollywood, which was declared a pro-choice city in 1991, crowds united outside City Hall.

"Now is the time for us to join the National Organization for Women, join Supermajority, find your tribe and fight this," Karen Eyers, vice president of Hollywood NOW, told the crowd. "Fight this and let the legislators know that we will not stand for this, that it ends now."

Lindsey Horvath, West Hollywood's mayor pro tem, praised those who rallied, saying they will "lead us in the battle against the forces that seek to divide us, to wear us down, make us give up, give in, throw in the towel. But we will never give up. We will never give in. We will never be silenced, and we won't go back."

The West Hollywood City Council on Monday approved an ordinance barring the city from doing any official business with states that have antiabortion laws on the books.

Similarly, the Los Angeles County Board of Supervisors voted Tuesday to ban official travel to Alabama for one year, in response to the new law. Exceptions would be allowed for an emergency or matters in which the prevention of travel could harm county interests.

"This challenge by Alabama and other states would overturn decades of precedent," Supervisor Hilda Solis said in a statement after the vote. "It is an attack not only confined to the residents of those states, but an act of aggression upon all of us. We must stand in solidarity and in opposition against extremist and unconstitutional laws that put the health and well-being of families at risk."

The Los Angeles Unified School District also is scheduled to consider a resolution in opposition to the law.

Alabama's law, signed by Gov. Kay Ivey last week, is the most restrictive of its type in the nation. It bars virtually all abortions, including in cases of rape and incest, allowing only those necessary to preserve a woman's life. It also includes a penalty against doctors who perform abortions for up to 99 years in prison.

The law is seen as an effort to challenge Roe vs. Wade, with antiabortion forces eyeing the now-conservative-leaning high court as ripe for a challenge to the case. 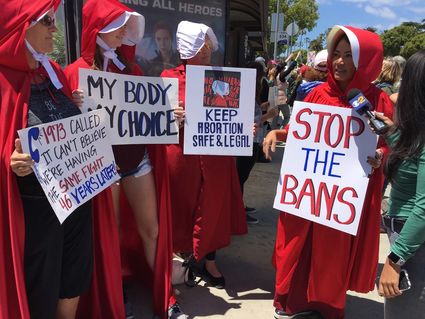 Women wearing costumes from Handmaids Tale, at the Los Angeles Women's March, May 19, 2019.

"When God creates the miracle of life inside a woman's womb, it is not our place as human beings to extinguish that life," he said.

Several states have long-standing "trigger" laws on the books to ban or restrict abortion rights if Roe vs. Wade were overturned. More than 1,000 abortion restrictions have been enacted since Roe vs. Wade.

California is one of nine states that has a policy explicitly protecting abortion rights if the law were overturned.

Colleen Shalby is a reporter for the Los Angeles Times. She previously worked at PBS NewsHour in Washington, D.C. She's a graduate of George Washington University and a native of Southern California.