Indians voted en Masse for a leader they could believe in 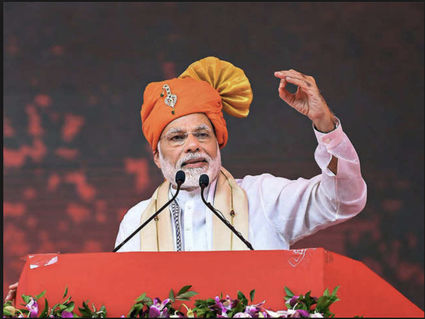 India voted en Masse for a leader they could believe in, Narendra Modi

Here are 10 reasons why the current prime minister of India, Narendra Modi will be sworn in for a second term as a result of his victory in the general elections of 2019:

Modi Leadership- for the first time in 72 years, Indians are truly proud to be Indian. This is due to Modi's great standing as a global leader and India's ascent as a real force to reckon with. Vladimir Putin recently awarded him the highest national honor in Russia. Prior to that, he was also given national awards in South Korea and UAE.

NOTA- No other alternative: Extensive exit polls recently conducted revealed that Modi was still immensely popular nationwide, by a long shot. No other contender came close. Indians seemed to not find any other alternative appealing. It has to be noted that both Sonia Gandhi, and her son Rahul Gandhi who is the president of the main opposition party, the (INC) Indian National Congress, were out on bail, being investigated for massive embezzlement charges in the National Herald case.

Large Mandate in government. With a weaker mandate and fragmented coalition government, several regional parties would have been fighting for space for their own state level issues and the larger national issues like national security, fighting terrorism, economic growth, technological advancements and job creation will be neglected. The election result indicates that people agreed the importance of a large mandate being reached so important policies can be implemented.

Weak index of Opposition: The opposition was weak with no agenda and no strategy other than a common disdain for the ruling party, the BJP and Modi. This index of opposition included several regional parties. Each of which had it's own needs and agenda. People could see through the façade and had no faith in the opposition collective.

End of dynast politics- For 57 for the past 72 years, it was one party, the Congress party, that was in power. Unfortunately this hegemony had caused a lot of negative consequences like nepotism, corruption, dictatorial rule, the Indian people seems to have really had enough especially after the 10 years stint that ended in 2014. India deserves more, better than what it has had over the past 6 decades and people could see this very clearly.

Fastest growing economy in the world- for the past 5 years, growing at 7.8%, India has been the fastest growing economy in the world. With IMF and the World Bank praising India, most citizens felt confident that the country is going in the right direction. The middle class has grown exponentially in the last 5 years and more and more people have come out of poverty than ever before. In the next 10 years, it will move to becoming the 3rd largest economy, with the fourth strongest military and second largest consumer market. Indian citizens realized that it in in the country's best interest that that it appointed the right kind of decisive, strong, forward-thinking leadership to see it through to the future.

Resurgence of national pride and fervor- In the wake of the dastardly Pulwama suicide attack in Kashmir in February, where over 40 Indian armed forces soldiers were martyred, the threat of radical Islamic terrorism is at its height. The involvement of state funded terrorism by Pakistan has alarmed the world, with most international leaders condemning this attack and pressuring Pakistan to take drastic steps to curb this terrorism. Religious terrorism is the biggest hurdle towards global peace that is facing the planet today and more needs to be done to address this problem. We have seen a new India rise to the occasion, which retaliated by using air strikes and wiping out scores of jihadists in the Balakot training camp. It showed the enemy and the world that we have a 'zero tolerance to terrorism' policy and that serious actions will be taken. A strong message had been sent out and an unexpected election result in 2019 would have pushed back this military stance by several years to the dark days when there was absolutely no response to the infamous 26/11 Mumbai terrorist attacks.

Social media engagement- Facebook had removed 678 pages administered by the congress IT cells as it was against the rules of a fair election. In contrast, the BJP was a master strategist when it comes to social media and the PM was a novice in connecting with his fans through apps and programs like Chai pe charcha. Recently, Modi's tweet, Main Bhi Chowkidar was the most tweeted tweet in the world, getting almost an entire country behind him. India is shining on the global stage and Modi is seen as one of the strongest leaders globally. He was recently declared the most popular global leader on Social media getting twice as many likes and followers as Donald Trump who came in second.

Its in the Arithmetic- To win the majority of seats, a party needed to win the state of UP (Uttar Pradesh), the largest state in India with a population of 200 million. This state accounts for 80 seats and in the 2014 elections, the BJP swept the state with winning 73 out of 80 seats, an incredible victory. It maintained its majority during the by polls of 2017 as well. Sephologists had been predicting a sharp dip in these numbers with the BJP set to loose 35 to 40 seats. But what they loose in UP, they gained in other states like West Bengal and the south Indian state of Tamil Nadu and Karnataka. So it evened out in the end.

To conclude, due to the tireless efforts of all his party workers and the immense popularity and respect for Modi, India voted en Masse for a leader they could believe in. They voted with the hope that Modi will take India to new heights and development and prosperity for all. They feel India did get the strong, stable, future- driven governance that it truly deserves. What happens in India ripples across the world. So it shall be "Phir Ek baar, Modi sarkar"!