"Brexit is a process and compromise is needed to pass a deal that works for everyone," Amber Rudd tweeted. 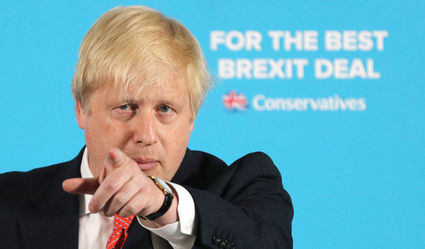 Unlike outgoing Theresa May, Britain's likely next PM Boris Johnson was an early Brexiter.

London (dpa) - A contender to succeed Prime Minister Theresa May on Saturday vowed not to serve under early favourite Boris Johnson and to oppose any attempt to take Britain out of the European Union without a withdrawal deal.

International Development Secretary Rory Stewart, one of a dozen candidates to replace May as leader of the ruling Conservative party, said he "could not serve with Boris Johnson."

Stewart told BBC Radio 4's Today programme that he spoke to Johnson about Brexit earlier this month, when the former foreign secretary assured him that he would not push for a no-deal withdrawal.

"But it now seems that he is coming out for a no-deal Brexit," Stewart said.

Brexit is expected to be the biggest issue in the Conservative leadership contest, which will formally begin on June 10. May announced her resignation on Friday.

International Trade Secretary Liam Fox told the BBC that it was "increasingly likely" Britain would leave the EU without a deal.

"It is best for us to leave with an agreement," Fox said. "But I think that it is possible, and probably increasingly likely now, that we could leave without a deal because I think there's a limited patience from the European Union with Britain's constant delay."

Britain was scheduled to leave the bloc on March 29 but Brussels granted an extension of the Brexit process until October 31, after May failed to win parliamentary approval for the withdrawal agreement she had negotiated.

Former Brexit secretary Dominic Raab has also declared his leadership candidacy and will rival Johnson for the votes of the party's eurosceptics.

Both men resigned from May's cabinet to oppose her Brexit deal. Health Secretary Matt Hancock announced his ambition to lead the country on Saturday. "I am standing to be prime minister," Hancock tweeted.

"We need a leader for the future, not just for now," he said. "I will deliver Brexit - and then let's move forward to the bright future we must build for Britain."

Work and Pensions Secretary Amber Rudd, one of the Conservative government's most respected pro-EU politicians, told the BBC on Saturday that she would be "very concerned about somebody who is too enthusiastic about no deal."

"Brexit is a process and compromise is needed to pass a deal that works for everyone," she tweeted.

Rudd said she will not stand in the election because she believes the Conservatives and British voters would prefer "someone who is more enthusiastic about Brexit" than she is.