Public appears upset at the failure of Brexit, 2 years after voting to leave EU 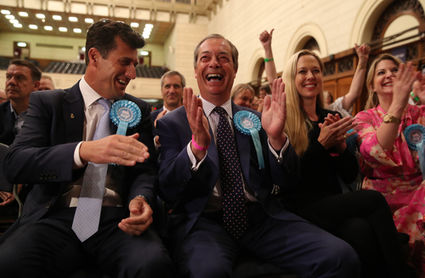 Brexit Party leader Nigel Farage (centre) celebrates being elected after the European Parliamentary elections count at the Guildhall in Southampton.

The veteran Eurosceptic's party rode a wave of public dissatisfaction and anger about the current state of Brexit to get 31.7 per cent of votes, securing 28 of Britain's 73 seats in the European Parliament, according to EU estimates.

The projected party's share is higher than that of the two main parties combined.

Labour and the Conservative Party "could learn a big lesson from tonight - though I don't suppose that they actually will," said Farage, who formed the Brexit Party to protest the fact that Britain did not leave the European Union as originally planned on March 29.

"Never before in British politics has a new party launched just six weeks ago topped the polls in a national election," he added.

The UK Independence Party, formerly led by Farage, plunged to 3.5 per cent, losing all its 23 European Parliament seats which appeared to shift to the Brexit Party.

The Liberal Democrats, who are staunchly opposed to Brexit and campaigned for a second referendum with an option for Britain to remain in the EU, ran second with a projected 18.5 per cent, a big leap from the 6.7 per cent they collected in 2014.

Labour ran a distant third, securing 14 per cent, while the Conservatives slumped to fifth place with just 8.7 per cent - a large decline from its 24 per cent share in 2014.

Labour's left-wing leader, Jeremy Corbyn, said as the results were being counted that the elections were a "proxy second referendum."

"With the Conservatives disintegrating and unable to govern, and parliament deadlocked, this issue will have to go back to the

people, whether through a general election or a public vote," he said.

The elections in Britain were dominated by the debate over how and when the country should leave the European Union.

May agreed on Friday to step down as Conservative leader after she failed to get lawmakers to approve the Brexit deal she negotiated with Brussels, amid sharp divisions in her party between eurosceptics and those who favour a softer Brexit.

"British" and "exit", Brexit is the withdrawal of the United Kingdom (UK) from the European Union (EU). Following a referendum held on 23 June 2016 in which 51.9 per cent of those voting supported leaving the EU, the Government invoked Article 50 of the Treaty on European Union, starting a two-year process which was due to conclude with the UK's exit on 29 March 2019 – a deadline which has since been extended to 31 October 2019.

Former Brexit secretary Dominic Raab, who resigned to protest May's Brexit deal, said ahead of counting that the backlash against the two main parties in the elections reflected "voters' frustration with all the politicians who have failed to keep their promises on Brexit."

Corbyn has also faced division in his party, with many members urging him to campaign for a second Brexit referendum.

John McDonnell, Labour's shadow chancellor and a close ally of Corbyn, said the party's leaders had done "the responsible thing" by backing another referendum only as a last resort.

"It was a hard road to follow," he said. "But someone had to be there and say, can we bring the country back together again?"

In his campaign, Farage said May's government and all members of parliament had "betrayed Brexit," urging voters to help him "change politics for good."