Social Media Blamed for 2 Deaths on Mount Everest in Just One Week.

US Climber, 62, Dies While Descending Mount Everest. 11th Death on Everest in 2019 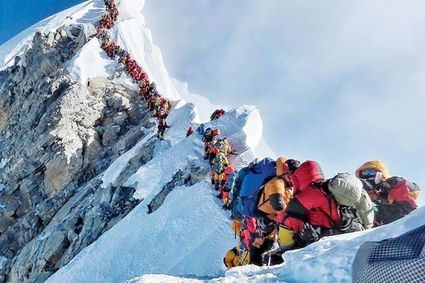 Traffic Jam on Everest, 2019. Christopher Kulish "saw his last sunrise from the highest peak on Earth," his brother Mark Kulish said in a news release carried by the Denver Post on Monday.

A “drive for social media recognition” is what’s causing the treacherous overcrowding conditions on Mount Everest this year, an expert climber says.

“It’s recognition instead of significance,” explained Adrian Hayes, a British mountaineer who has scaled Mount Everest, K2 and Makalu — three of the world’s highest peaks.

“People who don’t know a crampon from a tampon,” he told the South China Morning Post.

Hayes, 59, said he was disgusted when he saw the viral picture that was posted Monday of Everest climbers hunched together in a massive traffic jam at the mountain’s summit.

“Unacceptable and disgraceful,” he said, blaming the Nepalese government for issuing so many permits.

“Greed and ego,” Hayes added. “The Nepalese government are trying to defend themselves instead of recognizing that there is a problem.”

Hayes’ biggest problem, however, seems to be with the inexperienced climbers.

“Everest is the tip of the iceberg for this drive for social media recognition,” he said. “It’s recognition instead of significance. And that’s the difference between internal significance. That internal drive has been over taken by ‘look at me – look what I’ve achieved.’ We’re on this PR drive and we don’t even know it.”

Kathmandu (dpa) – A 62-year-old American climber died on Mount Everest on Monday, bringing the death toll this season on the world's highest peak to 11, his family said.

Christopher Kulish "saw his last sunrise from the highest peak on Earth," his brother Mark Kulish said in a news release carried by the Denver Post on Monday.

Mark Kulish said that his brother scaled Everest in nearly ideal weather after last week's crowds cleared, becoming a member of the "7 Summit Club" as he scaled the highest peak on each continent.

Christopher Kulish died early on Monday during the descent, his brother added.

A 56-year-old Irishman died in his tent on Friday after turning back before reaching the summit, his Nepalese guide died on the same day after being airlifted to Everest's base camp.

A day later a British man died after returning from the summit while another Irish climber who went missing on May 16 is presumed dead on the mountain.

Three Indians - two women and one man - died last week during their descent after scaling the peak, as hundreds of climbers pushed for the summit while taking advantage of this week's weather windows.

Earlier this month, another US climber and an Indian climber also died during their descent. An Austrian climber died on the Tibetan side of the 8848-metre peak.

Babu Sherpa, the managing director of Peak Promotion, said overcrowding had congested the route from Camp IV to the top.