US President Donald J. Trump claims he was 'sticking up for Biden' with 'low IQ' remarks 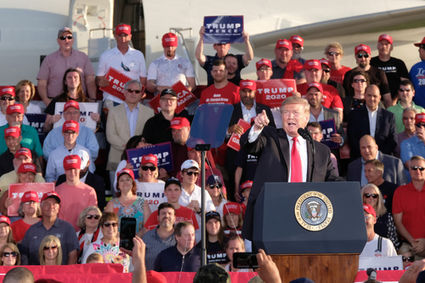 "I was actually sticking up for Sleepy Joe Biden while on foreign soil. Kim Jong Un called him a 'low IQ idiot,' and many other things, whereas I related the quote of Chairman Kim as a much softer 'low IQ individual.' Who could possibly be upset with that?" Trump tweeted.

Trump had been heavily criticized after he insulted Biden on a trip to Japan, with commentators saying the president had failed to observe an unwritten rule that domestic politics should be left at home by US officials when abroad.

"Kim Jong Un made a statement that Joe Biden is a low-IQ individual. He probably is, based on his record," Trump told reporters at a news conference alongside Japanese Prime Minister Shinzo Abe on Monday.

On Twitter he had earlier said he had "also smiled when he [Kim] called Swampman Joe Biden a low IQ individual, & worse."

Biden, who was vice president under Barack Obama, is currently leading opinion polls for the Democratic nomination to run against Trump in next year's election.

A spokeswoman for Biden's campaign said earlier Tuesday that Trump's remarks were "beneath the dignity of the office."

"To be on foreign soil, on Memorial Day, and to side repeatedly with a murderous dictator against a fellow American and former vice president speaks for itself. And it's part of a pattern of embracing autocrats," Kate Bedingfield wrote on Twitter.