It takes 15 minutes for the darts to kick in, giving the hogs ample time to freak out before they collapse. 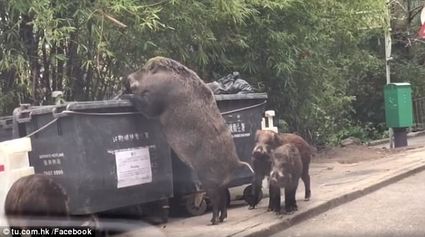 Hong Kong (tca/dpa) - Out of the darkness appeared a snout.

"Fei zhu! Fat pig!" 8-year-old Shino Chen shouted to her younger brother as she jumped up and down and pointed at a wild boar.

The hairy black pig, which must have weighed at least 150 pounds, grunted and snuffled through a flimsy, old fence along the sidewalk. The children tiptoed toward the animal then sprinted back to their father's side.

Kenneth Chen, 44, and his children visit the boars almost every night. All they have to do is step out of their apartment here in the neighbourhood of Tai Wai, located on the fringes of an ever-expanding metropolis.

"I bring my kids to see a natural habitat because they seldom get to see live animals in Hong Kong," Chen says.

Hong Kong's 7.4 million residents spend most of their days rushing between high-rises, metro stations, tiny apartments and air-conditioned offices. People occupy less than a quarter of the 426-square-mile region, making its urban core one of the most densely populated places in the world.

The rest of Hong Kong belongs to monkeys, snakes, porcupines, boars and other wildlife.

The city is a concrete jungle in the middle of an actual jungle.

Now, as urban areas sprawl into the surrounding hills, Hong Kong is struggling to contain a wild boar problem.

The pigs are everywhere: sprinting down the highway, digging into dumpsters, falling through the ceiling of a children's clothing store, sauntering into metro stations, taking over barbecues, confronting police at the airport, even swimming across the balmy bays of Hong Kong Island.

No one has conducted a census to determine the actual number of wild boars in Hong Kong. But encounters reported to local authorities have more than doubled in the last five years, from 294 in 2013 to 679 in the first 10 months of 2018 alone.

There have also been injuries: A 70-year-old man was hospitalized after he threw a stone at a wild boar and the animal retaliated by biting him.

The classic solution for boar overpopulation in most places is hunting. Hong Kong once licensed hunters to kill boars, especially in rural areas where farmers often complained about the animals uprooting their crops.

Boars have also provoked anger for lurking around cemeteries, waiting to eat food that people leave on graves to honour deceased relatives in accordance with Chinese tradition.

But Hong Kong's government suspended boar hunting in 2017 in response to an outcry by animal rights activists.

Roni Wong, the 35-year-old founder of the Hong Kong Wild Boar Concern Group, has spearheaded public confrontations with hunters, shouting at them to desist from harming the pigs.

"It is very cruel, not civilized behaviour to do that," Wong says.

He says that humans and boars can peacefully coexist as long as people follow a few basic rules: "We always educate the public, don't feed the wild boars or make them angry. Just leave them and they won't attack."

On the other side of the debate are activists who say defenders of the boars are naive.

"They actually have absolutely no idea how dangerous these animals are," says Wesley Ho, spokesman for Feral Pig Hong Kong, a group formed last year to demand stronger action against the pigs.

Killing boars isn't wrong when it's necessary for protection, he says.

"They may not attack 100 times, but the 101st time, they could, and those attacks could be fatal," he says. "No matter what, human lives are the most precious thing. They come first in any case."

Ho says many Hong Kongers are afraid to go camping or have picnics, because gluttonous boars are encroaching on human space and stealing food. "Looking at them, they're so fat," he said. "How hungry can they be?"

Searching for a compromise, politicians have suggested different tactics for the boar problem, including introducing natural predators into Hong Kong or sending the boars to nearby islands.

But wild boars are strong swimmers, and their predators - tigers and wolves, among other carnivores - wouldn't exactly fit the urban landscape either.

For now, the city's solution is birth control.

A team of veterinarians recently launched a two-year pilot sterilization program that starts with tracking down boars and shooting them with tranquilizer darts.

It takes 15 minutes for the darts to kick in, giving the hogs ample time to freak out before they collapse.

"Sometimes it's in the middle of the city centre, like a big pig in a small area and it's very challenging," says Karthi Martelli, one of the vets.

Then the females are injected with a three-year contraceptive and, along with the males, released back into Hong Kong's country parks.

It's not a perfect system, Martelli acknowledges. But so far nobody has invented a more humane option.

"Can you imagine caging a (330-pound) wild boar?" she says. "They have tusks. There is no real cage that can hold them for a few days. So we need to come up with a method of sterilization that's minimally invasive." 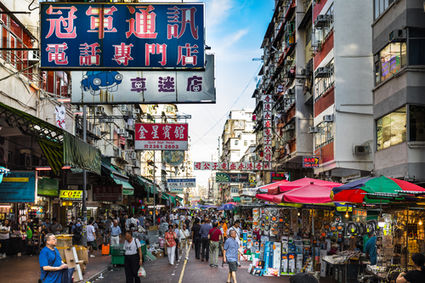 The biggest problem in Hong Kong is not that boars or humans are hurting each other, she says, but that too many people find the pigs adorable and decide to feed them.

It doesn't help that 2019 is the Chinese Year of the Pig and that some consider boar sightings a sign of good luck and prosperity.

"It was really cute once upon a time, but I mean, wild pigs running loose in a city center is not very exciting any more," Martelli says.

Her husband, Paolo Martelli, who is also a veterinarian, points out that the invading species is the human, not the boar.

"They've always been here," he says.

Now the boars are eating more, reproducing more, and living an unhealthy urbanized life, Karthi Martelli adds: "It's a man-made problem but the pigs are paying the price."