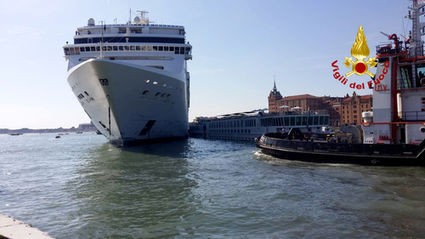 Rome (dpa) - A cruise ship rammed into a moored tourist boat as it docked in Venice on Sunday, leaving at least four people with minor injuries, according to city officials.

The ship, which dwarfed the other vessel, crashed as it came into the San Basilio cruise terminal in the popular lagoon city.

The people injured were all taken to an area hospital, aid Venice officials.

Dramatic footage of the collision appeared to show some people falling into the water as the smaller boat was hit. The larger ship, with the name "Msc Opera" on the side, loudly blasted its horn as it approached while passersby fled.

The accident took place on the Giudecca canal in the centre of Venice, where there has been long-running debate over access to cruise ships on the city's iconic but increasingly overcrowded waterways.

Critics have called for a complete ban on cruise ships, and UNESCO had already warned Venice that the giant ships were endangering the city's world heritage status.

Venice Mayor Luigi Brugnaro called an extraordinary meeting on Sunday, saying the incident was proof that cruise ships should no longer be allowed into the canal.

The cause of the accident was an engine failure on the cruise ship, according to Davide Calderan, president of Rimorchiatori Uniti Panfido, the tugboat company that was pulling the Msc Opera.

The engine of the Msc Opera, which can carry more more than 3,500 people, jammed, Calderan told Italian media.

It therefore accelerated instead of slowing down when mooring. The cruise company MSC Cruises spoke of a "technical problem."

"The accident could have ended in tragedy," the governor of Veneto region Luca Zaia said in a statement, adding that the city couldn't "wait any longer" for a ban on large ships entering the San Marco area.