Greatest Sea Assault In History, D-Day Was the Beginning of the End of World War II in Europe 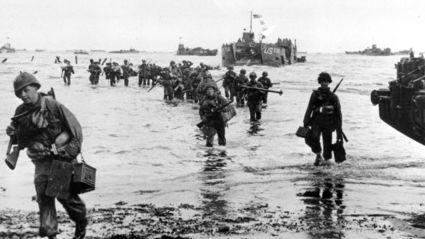 London (dpa) - More than 150,000 British, US, French, Canadian, Polish and other Allied troops landed in Normandy in German-occupied western France on June 6, 1944, staging "the greatest amphibious operation in history," according to Britain's National Army Museum (NAM).

Adolf Hitler's Nazi Germany had some 50,000 troops near the target area of the French coast, and relatively few aircraft there.

Most divisions of the Germans' western army were deployed further north where the Allies were expected to try to land.

Germany had built an "Atlantic wall," a chain of defensive forts, bunkers and gun emplacements stretching some 1,500 miles from Norway to the south of France and strengthened by barricades and mines on beaches.

In the D-Day landing area, the beaches were only partially secured. The coastal defenses further north near the port of Calais, where the landing was expected, were better developed.

The Allies began Operation Neptune late in the afternoon of June 5, launching an armada of more than 5,000 ships carrying troops and supplies from ports in southern England.

The first transport planes and gliders began the airborne assault later that night as the Allies targeted five coastal sections east of the port of Cherbourg, using the code names Utah, Omaha, Gold, Juno and Sword.

Allied warplanes began a day-long bombardment of coastal defenses and German troops in the early hours of June 6.

"Heavy bombing, along with a massive naval bombardment, destroyed many of the German defenses," allowing assault troops to land on the five beaches, according to the NAM.

The operation succeeded after six days of fighting, allowing the Allies to connect the five bridgeheads into a 65 mile wide front. The Allies registered losses of about 12,000 men, including about 4,400 dead, on the evening of D-Day,. 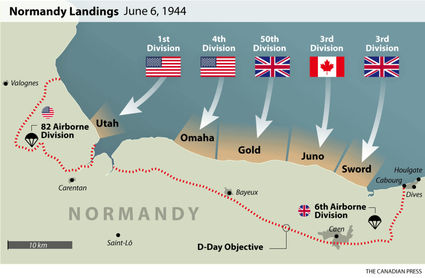 Up to 20,000 civilians also died amid the devastation in Normandy.

The Allies had also used "elaborate deception plans to convince the enemy that the main landing would be in Calais," including the use of double agents to spread false information, heavy bombing of Calais and a dummy 'army' being set up in eastern England.

They also deployed special forces teams and saboteurs working with the French resistance.

A Supreme Allied Command was set up under US General Dwight Eisenhower to coordinate the D-Day assault by sea, air and land. Eisenhower served as US president from 1953 to 1961.