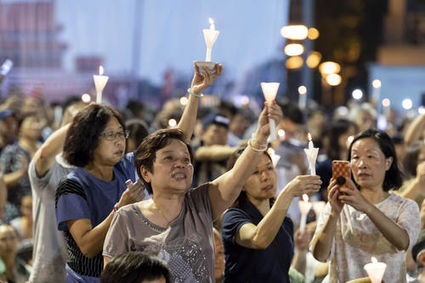 Hong Kong (dpa) - Tens of thousands of Hong Kong residents marked the 30th anniversary of the Tiananmen Square crackdown with a candlelight vigil on Tuesday.

The vigil featured songs, speeches and video montages of the weeks-long democracy protest which came to a bloody end on June 3-4, 1989.

Many of those attending the vigil said they remembered watching televised news broadcasts of the Tiananmen protests as children or students.

Angie Yuen told dpa she was 9 years old when she watched video footage of tanks rolling into Tiananmen Square.

"As long as we have the freedom to stand up for the Chinese people we will keep doing this," Yuen said on the outskirts of Victoria Park, where the vigil has been held each year since 1989.

"We've been fighting for 30 years we still cannot get progress," she said. "We would like them to say sorry for what they've done."

An unknown number of protesters died and remain missing following the crackdown, although rights groups estimate the number to be in the hundreds if not thousands.

Hong Kong and neighboring Macau are the only Chinese jurisdictions that officially commemorate Tiananmen Square. They are both former European colonies that returned to Chinese sovereignty in the late 1990s.

A number of Hong Kong activists travelled to attend the Tiananmen protests in 1989, while hundreds of protesters later escaped through the then-British colony to find asylum in the West.

Many of those attending Tuesday's vigil were over the age of 30. Attendee Ryan Lee told dpa that he brought his younger cousin Coleman Yip to the vigil for the first time so the young people of Hong Kong would not forget the importance of Tiananmen Square.

"I think this memorial of the event [serves] to teach us to not forget the history and we want this to pass onto the younger generation," he said.

Tuesday's vigil, however, appeared to be one of the highest turnouts in years due to the 30th anniversary and political turmoil in Hong Kong over a proposed extradition treaty to China. Organizers claimed a record 180,000 participants.

Many protesters expressed concern that the vigil might not happen in the future if political activists could be detained and extradited to China.

Self-governing Taiwan was also the scene of protests to mark the anniversary.

"The gradual erosion of freedom in Hong Kong shows that democracy and the authoritarian system that governs China can never coexist," Tsai said.

Meanwhile witnesses to the Tiananmen massacre called on the public in Taiwan to be aware of the evil nature of the Chinese Communist Party and the potential threat it poses to the self-ruled island's free and democratic lifestyle.

The comments were made at an event in Taipei's Liberty Square on Tuesday to commemorate the 30th anniversary of Tiananmen.

Wu Zuolai, a US-based columnist, urged Taiwan's politicians not to trust China's Communist Party or to be so eager to benefit from China's economic power. "What kind of interests can they actually give you? That's unrighteous wealth," Wu said.

Wu, one of the 1 million pro-democracy demonstrators on Tiananmen Square in 1989, said he still vividly remembers the gunfire and mighty military tanks rolling into Tiananmen Square.

"Back then, I could not believe it. I thought it was a dream," Wu said.

"The powerful Chinese dictatorship definitely poses a huge threat to Taiwan's democracy, freedom, and human rights," said Li Xiaoming, an Australia-based former lieutenant in the People's Liberation Army who was among the troops clearing Tiananmen Square in 1989.

"I cast no bullet and killed no one. However, when I thought of the victims, I had to repent of our sins due to the collective role of a shameful murderer back then," sobbed Li, one of the pioneering former Chinese military officers who openly talks about the 1989 massacre.

In mainland China, the anniversary went unobserved except for increased security around Tiananmen Square, where uniformed police checked IDs and vehicles were prevented from idling too long.

Many young Chinese citizens, particularly those born after 1989, do not learn about the Tiananmen Square protests until they travel outside of China or study abroad.

In a rare concession on Tuesday, however, China's Foreign Ministry obliquely acknowledged the democracy protests as "political turmoil that occurred in the late 1980s" as it blasted calls by the EU and US for greater transparency in the number of protest deaths.