HIV almost killed off the idea of breast-milk donation, but it is now making a comeback 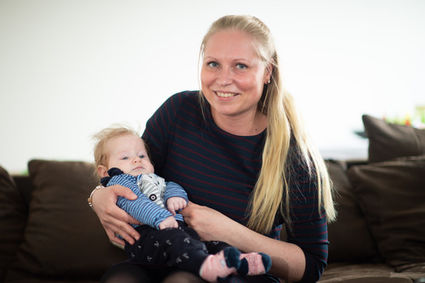 Breast milk donor Jana Bartsch sits on a couch with her son Emil.

Magdeburg, Germany (dpa) - The reason that Jana Bartsch became a Breast Milk donor is currently lying peacefully in a cot. A few months ago, Emil arrived prematurely at 34 weeks.

He had to have several operations and wasn't able to breastfeed but Bartsch decided that she would pump her milk until her son could drink by himself.

"First our freezer filled up, then that of my in-laws," says the 29-year-old nurse. There was also a freezer compartment filling up at the hospital in Magdeburg where her new son spent the first nine weeks of his life.

Eventually Bartsch decided to donate the milk to other babies - a decision lots of other mothers across Germany are making, too.

The idea of breast milk banks is 100 years old but has recently regained traction in Germany.

In 2016, there were 15 such banks across the country, according to Ralf Boettger, a neonatologist and director of Magdeburg's breast milk bank.

Now there are 23, and more are planned: A nationwide initiative for more breast milk banks co-founded by Boettger has been active since last year.

"We are campaigning for all of [Germany's 16] states to have at least one breast milk bank within the next five years and for all premature babies in need to have access to donor milk," says Anne Sunder-Plassmann, who also works for the Breast Milk Initiative.

Breast milk is the most nutritious thing for premature babies and newborns, Boettger says. There are lots of similar ingredients in commercial formula milk, but it can't replicate every one, he says.

Breast milk helps the development of the baby's immune system and protects them from infection. Boettger notes that premature babies who are given breast milk get fewer illnesses. "Breast milk offers protection," he says.

"There are mothers who have too much milk," says Boettger. And there are also mothers who, for a variety of reasons, cannot breastfeed. In order for their children to get the benefits of breast milk, they are given donor milk, which is given via a tube if they are not yet old enough to feed themselves.

Bartsch has her breast pump at the ready in the bathroom. The shoebox-sized device creates suction and pumps the milk via a funnel and a tube into a bottle.

"I sit down here at night," says Bartsch, pointing to a stool next to the sink. After she has fed her son and he's fallen asleep, it only takes a couple of minutes.

The amount of milk has significantly decreased in comparison to when she started. "Back then I was producing a litre and a half every day," she says. "I didn't want to throw it away."

Since the breast milk bank in Magdeburg was reopened in 2014, Boetgger has been able to help 300 of his patients. In total the bank has received 1,230 litres of milk from 80 donors. "Currently we've got enough milk for our own patients," he says.

Guidelines for donating breast milk are similar to those for donating blood. The woman must be healthy and must fill out a questionnaire and undergo a blood test. The milk is also examined for germs.

The history of the Magdeburg bank dates back to May 19, 1919, when it became the first breast milk collection point in Germany. When paediatrician Marie-Elise Kayser become a mother, she was producing too much milk and knew its value. Word spread and other mothers began bringing their milk to the clinic, and banks later sprang up in other cities.

While the breast milk banks remained open in former East Germany after World War II, in West Germany they were closed down in the 1970s.

"I think in West Germany it was primarily because of improved commercial formula milk and the huge amount of advertising that went with it that led to the banks being closed," says Sunder-Plassmann. 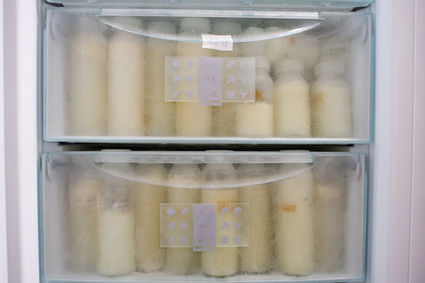 Bottles of donated breast milk in the drawer of a freezer in the neonatology Station 1 at Universitaet Magdeburg in Germany.

"That was before HIV. In lots of countries it was the HIV virus which sounded the death knell for breast milk banks."

Even today, three decades after the fall of the Berlin Wall, there is an east-west divide in German breast milk banks: There are 15 in former East Germany and only eight in the west.

Until now, clinics that want to set up banks have borne the costs themselves. According to the breast milk initiative, Lower Saxony is the first state that has put public funding towards it.

"In other states the setting up of banks often fails because the clinics have to pay the costs themselves," says Sunder-Plassmann.

Though donor milk can be vital to the survival of premature babies, German health insurers do not pay for it.