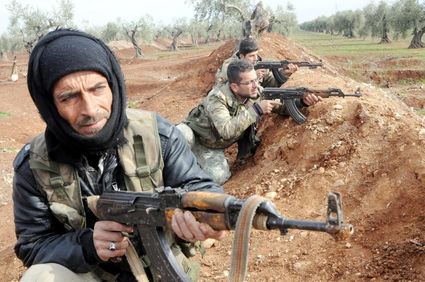 The Britain-based Syrian Observatory for Human Rights said rebels and jihadist groups managed to advance into posts manned by Syrian government troops in the village of al Jabeen.

Thursday's attack by the al-Qaeda-affiliated Hayat Tahrir al-Sham and Turkish backed rebels on al Jabeen village, came after a series of advances by regime forces into Hama's countryside and some of Idlib's countryside.

Activists in Idlib told dpa the battles are "fierce," and that the regime and the Russians are using heavy artillery and planes to counter the rebel attack.

According to the SANA report, rebel groups positioned in Latamina town and the surrounding area fired rockets late Thursday "on the citizens' houses and their properties in Mharda city, al Jabeen and Tal Melh towns in the northern countryside of Hama."

The latest escalation which started in late April in war-torn Syria has displaced thousands of people and killed more than 300 people, according to the observatory.