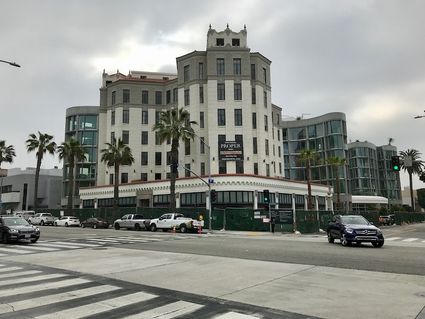 The proper hotel wraps around the Santa Monica Professional Building, which has landmark status.

The new hotel wraps around the Santa Monica Professional Building at 710 Wilshire Boulevard.

The landmark Professional Building built in 1928 was originally designed as a medical building and converted into commercial office space in the 1950s. It has been assimilated into the larger, new hotel building which occupies it's former parking lot.

The complex includes at least 3 expensive restaurants and an Ayurvedic spa (whatever that is).

"The arcs of these sleek building materials drape around the historic building, reading as monumental and orderly juxtaposed waveforms. The architecture provides the best of adaptive reuse, urban infill and a sensitive approach toward rehabilitation of the historical features found within the original structure. This focused and collaborated effort has contributed a fresh perspective of modern and preservation architecture to the City of Santa Monica Downtown District," wrote the project's architect Howard Laks.

In case you believe that Santa Monica already has enough hotel rooms that rent for more than $1000 a night, remember that the City's pension liability greatly exceeds what it can possibly pay by any measure. Like city employees, hotel employees are unionized. So the opening of yet another pricey Santa Monica Hotel is a double win for the Service Employees International Union or SEIU, not to mention the California Public Employee's Retirement System, or SEIU.