Tel Aviv Scooters Irk Some, Delight Others. As cities around the world brace for a wave of battery-powered scooters

.... to change how people get around town, Tel Aviv is the perfect example of the benefits brought by this hyped new mode of transport - as well as the risks. 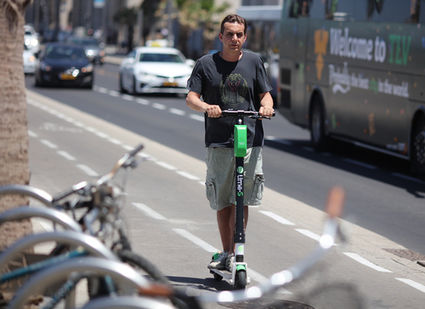 Tel Aviv allows people to get around on battery-powered scooters, and still lots of people complain about inconsiderate riders travelling too fast on footpaths, even though that's banned.

Tel Aviv (dpa) - Tel Aviv likes to think of itself as the "city that never sleeps" and electric scooters, which many residents are now using to get about, fit perfectly with that image.

But they have downsides as well as advantages.

Daniel Dorfman rents a scooter at least once a day. "It's quick, you don't run into traffic jams and it's a lot cheaper than the alternatives," says the doctor, who migrated to Israel from Costa Rica.

He always rides on the bicycle path and says so far he has only had "positive experiences" with scooters. The app he uses to rent them is straightforward and the ride costs a set fee of five shekels (a bit more than a dollar) plus half a shekel for every minute of use.

However not everyone has welcomed the arrival of scooters from US companies like Bird and Lime, which have already conquered cities across North America.

Lots of people complain about inconsiderate riders travelling too fast on footpaths - even though that's banned.

These complaints echo concerns among municipal authorities in cities around the world, such as San Francisco, Vienna and Brisbane, where scooters are posing many new questions about urban transport.

In Tel Aviv, as in many other cities with scooters, people will often ride without helmets or leave the scooters in the middle of the pavement or cycle path once they've finished with them

In Israel the minimum age at which you can ride an electric scooter is 16 and in order to rent one you have to be 18. Users are obliged by law to wear a helmet and must travel on cycle paths or on the road, never on the pavement. Carrying passengers is also forbidden.

Nevertheless, these rules are regularly flouted. Chagit Orian, who runs a Facebook group called "Return pedestrians to safety," says she gets hundreds of complaints about e-bikes and scooters every day.

The 63-year-old blames local authorities for allowing the use of electric scooters without investing in the proper infrastructure.

"The police and the city traffic controllers rarely do anything about infringements," she says. "We pedestrians are the weakest link in the chain."

Orian is a member of a city committee for traffic control and has been campaigning there to force all scooters to be issued with a licence plate.

"If riders know that they can be identified and brought to justice then the number of violations would drop immediately," she says. She also wants a clear separation of cycle and footpaths.

The model Schlomit Malka, who is well known within Israel, also began campaigning for people to wear helmets in 2017 after she had an accident in central Tel Aviv on a scooter and injured herself badly due to the lack of one.

Dor Oppenheim himself has never had an accident on a scooter but has friends who have. "It does worry me," says the 31-year-old. "That's why I always ride very carefully."

He always rents scooters when he comes to Tel Aviv, which, with a population of 450,000, is Israel's second-largest city. "It makes it so easy to get around everywhere," Oppenheim says.

It's because of their practicality that scooters are fast becoming the transport of choice in many modern cities and US venture capitalist Bradley Tusk believes they have great potential for growth in the United States. 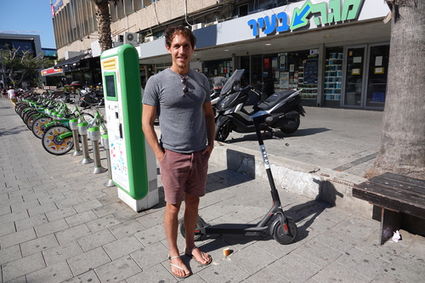 31-year-old Dor Oppenheim always uses rental scooters when he's in Tel Aviv. "It's just so easy to get around."

He has invested a significant amount of money in Bird, he said on a visit to Tel Aviv. The company is currently valued at 2 billion dollars, just like its competitor Lime.

Tusk says scooters are already popular in US cities like Los Angeles and Miami. In New York there have been problems getting permits for them despite the fact that, according to Tusk, they would be a perfect form of transport for the Big Apple.

"Our subway is overcrowded, travelling by car is a disaster - we need new ways of transporting people around," he says.

The most important thing, he believes, is to develop the right rules. "If you can learn something from the example of Tel Aviv that could be very valuable in New York or Germany," he says. "There's lots of good and lots of bad."