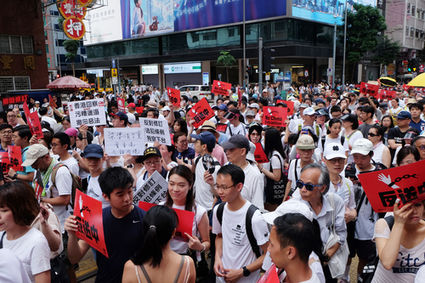 Police used tear gas and batons on protesters, many of whom wore surgical masks and came from the pro-independence student groups.

The clashes lasted around 30 minutes until around 12:20 am (16:20 GMT Sunday), the South China Morning Post reported, but stand-offs between police and protesters continued for hours into Monday morning.

They stood out from the otherwise peaceful protest that saw an estimated 1 million people take to the streets to protest a new law that would allow extradition to China.

The extradition bill is before Hong Kong's semi-democratic Legislative Council and will be debated on Wednesday.

It would allow for Hong Kong to extradite suspects to countries where it lacks formal extradition agreements, like mainland China, on a case by case basis.

Ordinary citizens to professional bodies have expressed concerns that extraditions could be used to prosecute individuals for political reasons and also compromise Hong Kong's standing as one of the freest places in Asia.

The government has promised to include safeguards and says the law will only apply to crimes carrying a prison sentence of at least seven years.

Hong Kong, a former British colony, returned to Chinese sovereignty in 1997. A principle of "one country, two systems" has been in place since then.