Why did we take down our original story about the death of a ballplayer?

A combination of death threats, lawyer threats and concern for personal safety. 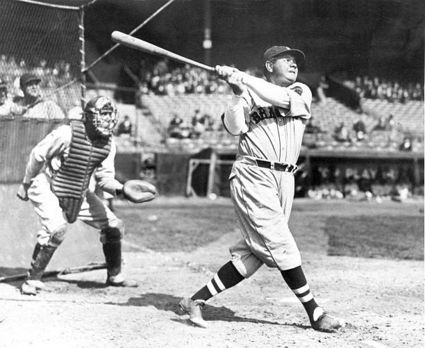 Babe Ruth at bat 80 years ago. Like other dead people, the Babe is an historical figure, with no legal right to sue the living for defamation. Just saying.

Those who know me, know that I am feeling my own mortality these days.

It isn't just the wad of cotton that's taped to my face, as a result of my second surgery to remove a cancerous growth behind my right eye. It isn't just my 59th birthday. It isn't just the death of my brother at 65 last year, from a mysterious illness that turned out to be a combination of Sarcoidosis and early onset Alzheimer's disease.

It's the realization that I have become older and wiser and unwilling to risk my life, or the safety of others around me, simply in order to post news stories on the stupid internet.

A certain much loved ballplayer suddenly, tragically and mysteriously died a week ago. Not yet 28, he died long before his time. The narrative that the Tarrant County police department and the Angels have fed the public and the press, doesn't make any sense to me. He didn't die from suicide or "foul play," say the police. In consideration of the family's wishes, the Tarrant County Medical Examiner's office will release more information after the completion of an autopsy, we are told, on or about October 2, 2019. Or maybe they won't.

Stan Greene from our organization wrote his opinion about the story. We posted it, labelling it speculation, and the Santa Monica Observer was attacked on multiple fronts. Not simply in the form of a threat letter from lawyers Kirkland and Ellis, representing the Angels and a certain deceased ball player. And not just in the form of anonymous phone calls and emails.

No, we also received multiple personal threats and attacks from anonymous sources. We'll never know if they were actually acquainted with the deceased, fans or whatever. But I do know that a young female intern from our organization got a creepy text message on her phone, just after midnight.

She wasn't frightened about it at all. But I was. I'm older, much older; and I know more about how out of hand the potential pile-on is getting in this country.

So when you wonder why you see stories like this one on the internet, see link below; remember that there are certain things worth risking your life and safety for, and others that just are not. We'll have more to say about this story in October, long after the receipts have all been tallied and the boys of summer have safely left the field.

p.s. I am in fact aware that like Babe Ruth, this was an exceptionally kind and decent baseball player, who by all accounts behaved admirably and was much loved by everyone.

p.p.s. I do not write any sports stories because pro-sports do not interest me, and I do not understand them. I am not a baseball, basketball, soccer, football or handball fan, and I do not follow any of those fine sports, having been a non-athlete in school. I suppose that's my loss, but it's true. In case it somehow isn't clear yet, I'm not just a coward, I'm also a nerd.

So what did your publication learn from this. Nothing. You printed a completely wrong story about Kobe's death.

Sooooooooooooooooo. All you idiots complained about a story that turned out to be fact. The best part of all if this. The Angles were the ones directly giving him the drugs! But yet this back in July. ..... Angels spokeswoman also blasted the article as “categorically incorrect” and said the “reckless reporting from Tyler’s hometown paper is disappointing and harmful.”

Some of these comments did not age well.

The “article” was IMO written as reporting rather than an “opinion” piece & it’s author made the following statement in it (I copied this article quite because I couldn’t believe it): “Given that Skaggs was in good mental health and seeing multiple doctors for injuries, it seems he made the same fatal mistake Tom Petty did last year. He obtained several opioid pain prescriptions from several doctors and didn't tell his doctors that he was seeing several doctors for the same painful problem. i.e. Petty simply overdosed on his own medication.“ No sources, no comment on what injuries, no attribution of author’s linkage to Tom Petty, no comment that MLB has a strong substance abuse stance, random testing program, and the Angels have world class medical staff. The implications were baseless. Speculation would be “doesn’t add up”, don’t have any facts yet, etc. Look up Hank Gathers, Reggie Lewis, Darryl Kile who died young and suddenly of medical issues.

Hard to imagine that the original story was printed without a fairly reliable source. Of course, the source can't be revealed due to all the internet bullying. This piling on is real, is getting worse, and many times leads to violence and even murders. To me, the bullies are the real cowards and the real problem this country faces going forward. The opioid epidemic is also horrific, so the public should know if that was the cause of death of a public figure. It's easy to defend someone who is deceased, but this same internet lynch mob would be the first to mock someone who went public with their problems in an effort to create more awareness. Anyone who made threats should be found and made accountable. This is why the Anonymous movement is all but gone. They just went to far when spreading hate & lies about the Steubenville rape case. They are now irrelevant, and so should be the fate of ALL bullies everywhere.

Which original story? The one that wrote about cocaine scattered around the room? There were at least two other subsequent changes. And your reference of taking down the original story is a bit confusing. Speculation was not my take away in reading the story. The Tyler Skaggs story was my first exposure to your publication and I am not impressed. I get that a dead man does not have a voice but I am sure glad the Angels organization has this young man's back in many different ways.

Nah, you can't just post some sob story then show no remorse for the harmful speculation and expect people to jump to your side. Actions have consequences and labeling this man's death as an overdose is flat out wrong when there is currently no evidence to support this. Even if it ends up being the case, you posted an article with no evidence to back this up and passed it off as a fact. Why do that when the family and team are grieving? Stop acting like every other person in this country and playing the victim when you're called out on your mistake.

P.S. The World Series is played in October. So the toxicology report will be released when baseball is on the national stage. Good for you, horrible for his family and friends who want privacy

I think the bottom line is you ran the story without regard to the deceased or those impacted by his death. Instead, you chose to allow a controversial and speculative commentary. Free press allows it, but you put yourselves in the category of tabloid reporting by doing so, nor giving any regard to the timing of such commentary. You wanted online hits and you got them. Seriously, what did you expect? I do not believe you are concerned about the mortality of your staff or yourself, or you would have exercised common decency in the first place. I am genuinely sorry to hear of your own encounter with cancer and your brother's demise. You have my condolences and prayers... come to think of it, perhaps this is similar to what should have been shared regarding the loss of Tyler Skaggs. The truth will come out once the report is in. Try waiting for it next time.

Your suggestion that the Angels, their lawyers, or the Texas Police engaged in “multiple personal threats and attacks” damages your credibility as a news organization and you as the publisher. And if you or an intern cannot deal with one “creepy text message,” it’s time to get out of the news business. (How did an anonymous person get your intern’s phone number? Or was it a non-SMS message, like Facebook Messenger or a Twitter DM? In any case, welcome to 2019.)

Maybe if you reported facts instead of speculation you wouldn't put yourself in position to be sued? I don't know. Just a thought.